Teresa Giudice is facing some serious jail time, but she isn’t letting it get to her. She knows she can’t change things, so she is working on staying positive no matter what. 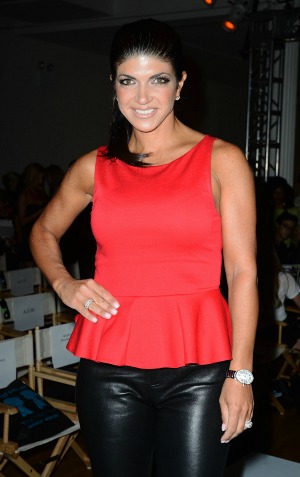 Teresa Giudice is doing what she can to stay positive, because she knows very little is in her hands right now. The Real Housewives of New Jersey star and her husband Joe Giudice have been indicted on 39 counts of mail and wire fraud, bank fraud and bankruptcy fraud. The couple pleaded not guilty to the charges in August.

She spoke earlier this week about why she has been putting on a brave face, despite the fact that there is a very real possibility she could face some serious jail time.

Real Housewives of New Jersey: Why tourism is down in New Jersey >>

“The thing is there’s nothing that anybody could do that could make things better or worse,” she told E! News “We’re just being positive and moving forward.”

The charges come from allegations that the Giudices didn’t file tax returns from 2004 to 2008, but Teresa admitted, “Some of the charges I don’t understand, but I am learning.”

“Of course, I’m not in denial, I understand everything,” she added. “My husband and I pleaded not guilty and that day in court will come.”

Giudice’s strength is partially coming from her maternal instinct, and her need to stay strong for her four daughters.

“I’m being the mom kind of keeping it all together,” she said. “I’m the rock. I can’t fall apart. If I fall apart, the rest of the family is going to fall apart.”

The reality star said she wants to answer all the questions people have about her situation, but can’t just yet because of the impending trial. She did say she is not blaming her husband in any way, and is hoping for an outcome in their favor.

“I love my husband more than anything and I will stand by him to the end,” she told Access Hollywood on Tuesday.