For the first time in the history of the program, Fox released nearly 13 minutes of raw footage to the press to get fans excited about the new judging panel and the upcoming season of American Idol. 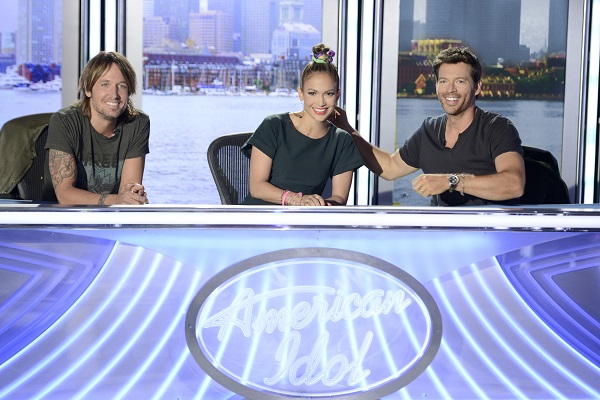 Before I get to the really fun stuff, here’s the timely information you need to know. Voting on American Idol‘s tagline began yesterday and runs through Monday, Oct. 14, at 11:59 p.m. PDT. You can have your say using by visiting AmericanIdol.com, the show’s Facebook/AmericanIdol page or using Twitter (the hashtags to use are listed next to the choices) to vote for any of the four taglines below:

Let your voices be heard!

Regardless of what tagline millions of voters choose, if the rough cut of the footage I was able to view is a true indication of what’s in store for the entire season, they’ve cut into a diamond.

Jennifer Lopez and Keith Urban have already had some experience in the hot seat, watching both talented and talentless performers parade before them in search of their dreams. Adding Harry Connick Jr. to the table was like sprinkling fairy dust over their heads. With his devilish poking and good-natured prodding of both contestants and fellow judges, most of the entertainment value from the rough cut came from behind the table and not in front of it.

What would a singing competition be without the latest (annoying) craze? That’s right, someone comes out twerking before breaking into a soulful rendition of “Over the Rainbow.” “I so did not expect ‘Over the Rainbow’ right now,” quipped Connick Jr.

What I didn’t expect was Urban to ask the contestant to twerk his way through the same song. After giving him his verdict, Lopez said, “You might twerk on it a little bit more.” And rounding out the dig, Connick Jr. said, “It’s a long shot…” while the three of them said in unison, “but it just might twerk!”
If they got that much action out of 3 minutes worth of twerking, can you imagine what the rest of the season will bring?

Despite his hilarity, word on the street was that Connick Jr. was “harsh.” After hearing that assessment, he went ahead and voted no on the contestant who delivered the news. Hey — it made me laugh!

I’ll be honest. I’ve never been one for competition shows. I don’t like them. At all. But watching Keith Urban, Jennifer Lopez and Harry Connick Jr. play together was better than tuning into some of the new sitcoms this year. The trio are funny and refreshing.

While one contestant was singing, Urban and Connick Jr. were talking among themselves behind Lopez’s head; Connick Jr. told Urban, “I went to the bar and I got drunk because nobody knew who I was.” You’re not going to find material that amusing on Dads, I can promise you that!