Lea Michele is slowly opening up about Cory Monteith and his fatal overdose, and reveals how she hopes to always remember Cory. FOX will air the Glee tribute episode to Cory Monteith tonight, Thursday, Oct. 10, at 9/8c. 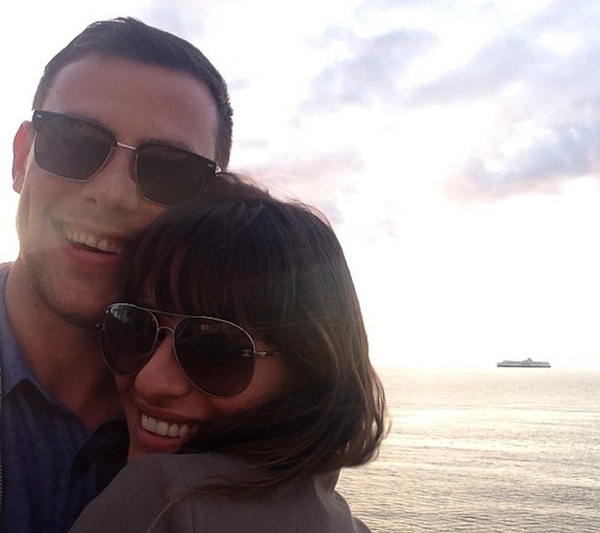 Lea Michele and Cory Monteith were one of Hollywood’s favorite couples. Monteith’s sudden death on July 17, 2013 shocked fans around the world and understandably sent Michele into a horrific reality that seemed fitting only for a nightmare.

Since Monteith’s tragic overdose on heroin and alcohol at the Fairmont Pacific Rim hotel in Vancouver in July, Lea Michele is just now sharing how Cory’s death affects her and her Glee cast members.

“I feel like, for me personally, I lost two people: Cory and Finn,” she said to TV WEEK Australia.

Tonight on Thursday, Oct. 10, FOX airs the Glee tribute episode to Cory Monteith, which will address his death. The episode is simply titled “The Quarterback” and features Lea Michele’s heartbreaking cover of “Make You Feel My Love” by Bob Dylan. The song is painful to hear, notably because Michele’s deep grief is palpable. She seems to hold back tears throughout the song.

Michele went on to reveal that the Glee cast and crew decided to openly grieve the death of Cory Monteith instead of making an attempt to hide their pain.

Listen: All the songs from the Glee Cory Monteith tribute >>

“We had a beautiful memorial for Cory in the auditorium and some of the cast members sang; people spoke about him. It only felt right that we would do the same thing for Finn, so I felt it was very therapeutic.”

Matthew Morrison, who plays the beloved Will Schuester on Glee, said Michele’s courageous ability to continue performing was inspiring for the entire cast. “She had one of the first songs we filmed for the episode and she did it so beautifully and after, she said something like, ‘It can’t be harder for anyone else than it was for me.'”

Lea Michele and Cory Monteith began dating in 2012. Monteith confirmed he and Michele were a couple in early December 2012 on The Ellen DeGeneres Show. Monteith was clearly in love with Michele as he spoke about her with a beaming smile on his face.

“I really woke up every single day feeling like I was being in some sort of spell of something, that I was lucky enough to have him in my life. I feel like what happened with Cory [in regard to his drug overdose] was this big,” said Michele as she gestured with her fingers to indicate a tiny amount.

Lea Michele said she hopes fans recognize what an amazing person Cory Monteith was despite his short life. “There was no greater man than Cory, so for the time we spent together I consider myself very lucky.”

Watch the trailer for Glee‘s tribute to Cory Monteith below. The episode airs tonight, Thursday, Oct. 10, at 9/8c.