Scandal stars Katie Lowes and Dan Bucatinsky share spoilers from the show’s third season, including hints on what kind of trouble each of their characters will be getting into this year. 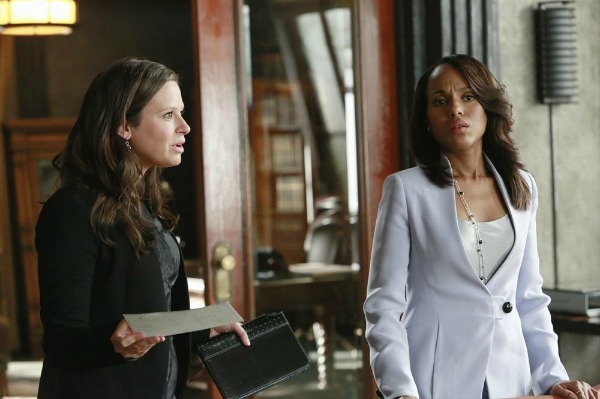 Scandal returned last week with a Season 3 premiere that was bursting at the seams with all kinds of shocking moments. Probably the most gasp-inducing one came when it was revealed just who had leaked Olivia’s name to the press (Warning: Major spoiler ahead!): Fitz.

With a premiere like that, you know there are plenty more exciting moments to come this season. SheKnows spoke to two of the stars of the hit ABC drama and got the skinny on what fans can expect to see this season.

First up was Katie Lowes, who plays the ever-mysterious Quinn. Lowes admitted that she was one very busy girl during the premiere last week. She said that she live-tweeted for a few hours that night and that her thumbs were in pain, but it was worth it.

When asked about what’s to come on Season 3, Lowes said, “There [are] a lot of stories that we have yet to tell.”

Are there more stories to tell about Quinn? “There are,” Lowes said. “There’s a lot of history that has not been told with a lot of the lead characters of the show,” she continued. “I’m very excited for fans to see where certain characters have come from and what they were like. You will see.”

As for what new stories there will be about Quinn, Lowes said fans need to keep an eye out for a particular episode. “Wait till Quinn’s Episode 7,” Lowed teased. “I’m marking it, I’m telling it now. I can’t tell you anything else except that it’s so scandalous that I don’t even know what’s going to happen.”

Scandalous for Quinn? Could that mean that Huck has truly created a monster with Quinn and that she’s going to going to get her hands even dirtier than last season? Quinn sure seemed to enjoy taking on Huck’s job, but perhaps this scandalous situation will be about something else entirely.

Fresh from his recent Emmy win, star Dan Bucatinsky, who plays James on the show, talked about what it’s been like to be on a series that has taken off the way Scandal has.

“I loved reading the pilot and thought it was sort of a game-changer,” Bucatinsky said. “I thought Shonda had sort of reinvented the genre, really, with sort of a romantic, political thriller — that combination, that pace. It took a while for the audience to catch on. But I think those are always the best kinds of shows, that have that stickiness to them, and I think Scandal does.”

What will James be up to this season? Bucatinsky would only hint that he’ll still be up to his same old tricks. “I only know what I do on the show and I know that the pace will continue to be kept up and that I will continue to use my relationship to my gain.”

To see the interviews in full, check out the video below.