The return of young Carrie Bradshaw is fast approaching. But, what should you expect from the next season of her life? A throwback or two from Sex and the City for starters! 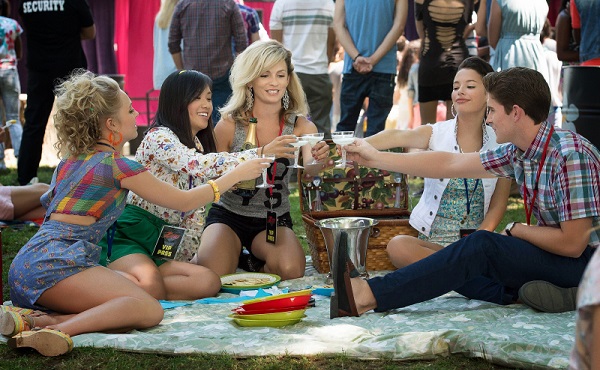 We are so totally excited that The Carrie Diaries‘ Season 2 premiere is just around the corner. But, like, what’s ahead for Carrie (AnnaSophia Robb)? We have a few spoilers we’re sure you’re dying to know!

1) You haven’t seen the last of Carbastian/Sebrie

When Season 1 ended, Carrie fans were devastated. They watched Bradshaw have her heart broken when things ended with Sebastian (Austin Butler). He crushed her hopes by having a drunken hookup with her best friend, Maggie. Carrie and Sebastian definitely reunite, though. Director Norman Buckley even shared with WetPaint an image of the happily reunited actors on set over the summer. Just as does the older, more mature Carrie Bradshaw, young Carrie easily forgives and forgets. Especially in the name of love.

Love Carrie Bradshaw? Get some love advice from her >>

Sebastian isn’t the only one seeing a little action. This season, Carrie will once again add to her ever-expanding list of boyfriends. The new name on her list will be Adam Weaver (Chris Wood). He’s described as a “wunderkind playwright” whom she’ll meet in the city.

Executive producer Amy B. Harris said of Weaver, “Their romance will have a huge impact on Carrie and her ‘coming of age’ story, and will have profound repercussions for her and Sebastian.”

“Coming of age,” huh? Could this mean Adam will be the one to swipe Carrie’s v-card?

And, who will introduce them? Maybe it will be her soon-to-be best friend…

If anyone can hook up Carrie with a playwright, it will of course be the always promiscuous and talented Samantha Jones. Earlier this summer, The CW announced it had cast Lindsey Gort as the PR pistol Samantha, and we’ll finally meet her. The two will meet because — gasp! — Sam is actually the cousin of Carrie’s worst enemy, Donna La Donna. We can’t wait to see how this all plays out.

4) Sebastian will have another hookup

Seb’s love for older women is far from a secret. Wasn’t his hookup with a teacher the reason he was kicked out of his last school? This season, Molly Sims will join The Carrie Diaries for an arc as a designer who ends up in Sebastian’s line of sight. Will the relationship happen before or after Sebastian and Carrie reunite? Only time will tell. One thing we know for sure: This could get sticky…

Last season, it was coyly slid in that Bennett’s roommate was Stanford Blatch, who — as you may remember — was one of Carrie’s other BFFs in Sex and the City. When The Hollywood Reporter spoke with Harris, she said we’ll definitely meet Blatch. At the end of Season 1, Carrie’s suburban boy BFF, Walt, became (mostly) openly gay and began a relationship with Bennett. Harris promised we’d explore more of their relationship, which will — eventually — bring Stanford and Carrie together, as well.

Eeeek! So, are you guys as excited for The Carrie Diaries‘ Season 2 as we are? Tell us what spoiler you’re most anticipating and what else you’d like to see for Carrie this season.