After being spotted with Kris Jenner at his winery and later at Joe Francis’ Mexico estate, Ben Flajnik is denying romance rumors with the reality matriarch. 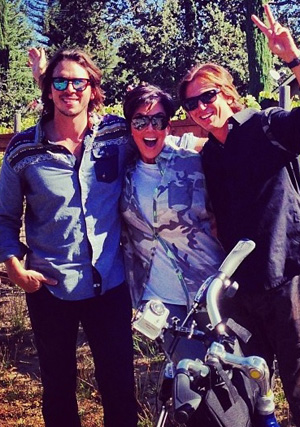 There is no cougar romance going on between Ben Flajnik and Kris Jenner, the former Bachelor claimed, bashing rumors to the contrary.

Speculation ran rampant after Jenner shared photos of herself and Flajnik on Instagram showing them hanging out at his winery. Plus, more rumors surfaced following sightings of the pair at Joe Francis’ estate in Mexico. But apparently the two are just friends.

“I did Kris’ talk show a few months back, brought my wines on the show,” Flajnik told Us Weekly magazine. “Of course I offered her a visit to the winery whenever she had a chance. That’s how we met.”

The 30-year-old winemaker added that Kris “ended up contacting me about a month ago or so and asked me if they could film an episode of Keeping Up with the Kardashians at the winery. I, of course, obliged.”

When Jenner, 57, visited Flajnik’s winery she brought along her longtime friend, Jonathan Cheban. The three of them rode around Sonoma on bikes and drank wine together, and “that’s where one of those photos [was] from,” Flajnik continued.

Surprised at the news of Jenner’s separation from husband Bruce Jenner, Flajnik said he was now “caught in a crossfire.” But the ex-reality star claimed that the Kardashian-Jenners are all “very nice people.”

Flajnik himself went through a very public breakup after lots of drama went down with his Bachelor fiancée, Courtney Robertson. The Season 16 couple began their relationship with lots of controversy due to Robertson’s rude behavior toward other girls on the dating show.

Once the season was over, various cheating allegations against Flajnik surfaced, and an inevitable split from Robertson came soon after.

But Flajnik says that he’s now very happy with a new girlfriend, who is also into wine.

“I’ve been dating this girl,” he told Us. “She’s local, she’s in the wine business. We’ve been dating, she’s super-great and super-smart. It’s been a few months at this point.”