Miley Cyrus went all out at her Bangerz album release party, making out with various men and women and climbing all over rapper Mike Will Made It. 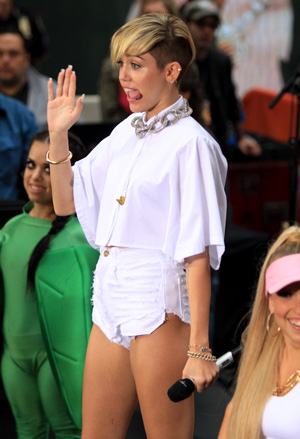 Celebrating the release of her new Bangerz album in a big way, Miley Cyrus was spotted at the big bash making out with everyone, man or woman, and was also all over fellow collaborator, Mike Will Made It.

Cyrus was the guest of honor at a private, late-night party on Wednesday at Jazz Room and Finale nightclubs inside The General in Manhattan. Showing up much after midnight, Cyrus arrived wearing a skimpy pink outfit paired with clunky black Frankenstein-styled shoes. While at the party, Cyrus predictably acted like a wild child and made out with practically everyone in attendance.

Yikes! Miley Cyrus is a hot mess in Las Vegas >>

Cyrus began partying at her table and was soon grabbing her friend’s boobs and “motorboating” Beacher’s Madhouse performer Amazon Ashley, a witness told Us Weekly magazine. Next, Cyrus moved on to hip hop producer Mike Will Made It, giving him lots of special attention. She was kissing the rapper on the neck and “grinding all over him.” He was happy to reciprocate by grabbing her butt and kissing her on the neck.

Then, Cyrus went to the dance floor and twerked all over various men and women pals and heavily made out with her blond, female friend. Later on, the “Wrecking Ball” singer was seen getting intimate with a mystery man in a gray suit. After dancing with him for a while, the pair shared a kiss with a third woman, who was a “little person.” After the three-way kiss, the former Disney star went on to do a lap dance on her suited, unidentified man friend.

Oddly enough, Cyrus was seen leaving the party at around 5 a.m. without her new mystery-man in tow.

Witnesses added that, while Cyrus had a blast for most of the night, there was also a moment of awkwardness when the DJ put on her “Party in the USA” hit from her Hannah Montana days. The singer/actress was quick to react and had the unsuspecting DJ change the tune in an instant.