Want to know more about your favorite show, The Walking Dead? Rolling Stone has you covered and we’re insanely jealous. 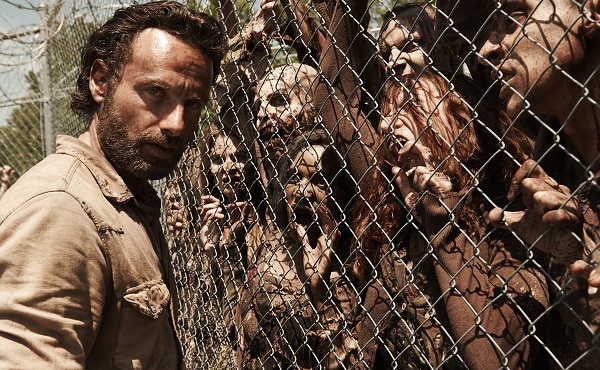 Most fans of The Walking Dead will never be lucky enough to go behind the scenes on their favorite, gory show. No one has backstage and behind-the-scenes access quite like Rolling Stone, though. They recently headed to the Georgia set and got a rare tour of what really goes on on-set. They’re sharing all the facts and insights in the upcoming Rolling Stone (with Andrew Lincoln as Sheriff Rick Grimes on the cover). The new issue hits stands on Friday, Oct. 11 but we have a sneak peek of some of the cool stuff they’re sharing.

Spoilers! What’s ahead for The Walking Dead Season 4? >>

If you’re looking for possible spoilers, you’ll just have to read the issue. However, we do know a couple interesting tidbits about where the show was supposed to begin and what we can expect from the zombies.

For instance, despite the fact that it’s not covered in the graphic novel, the showrunners had every intention of showing TWD viewers how the zombie plague overtook Atlanta. Sadly, the production designer, Gregory Melton, said it never panned out.

“It was going to be like Black Hawk Down, following an Army Ranger unit as the city succumbs to the zombie plague,” Melton told Rolling Stone. “That was thrown out due to cost.”

Is a romance brewing for Season 4 of TWD? >>

Bummer. While we won’t see the very beginning (at least not any time soon), we are beginning to see how things will progress. Especially in the case of the zombies/walkers/geeks/decays. Just like real rotting bodies, they’re continuing to decay. Yes, that means they’ll continue to become creepier with each passing season.

“As the show progresses, the zombies are decaying more and more,” the EP and special-effects guy Greg Nicotero said. “We always do the rotted-away lips because I’ve done research in terms of cadavers and corpses, and when the skin tightens, it pulls away.”

You know… it almost sounds as if we could reach a point in the series where the show is no longer using extras as zombies but, instead, computer-animated near-skeletons (or maybe something similar to the death eaters in Harry Potter?) That’s creepy as hell!

For more TV news, sign up for our newsletter. It won’t kill you >>

To find out more about Rolling Stone‘s adventures in Georgia and on the set of The Walking Dead (including which cast member has a stalker and whose death brought the cast and crew to tears), pick up the newest issue on Friday, Oct. 11.