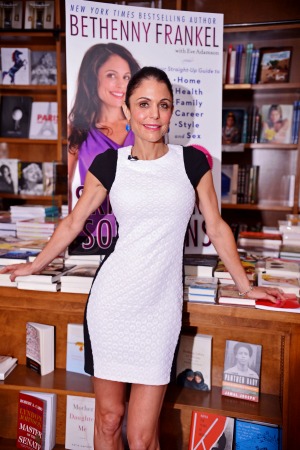 It isn’t easy being Bethenny Frankel these days. In addition to her tumultuous divorce from husband Jason Hoppy, the reality star’s talk show Bethenny is struggling in the ratings.

RadarOnline is reporting that the former Bravo TV star is now mad at her talk-show producer, Ellen DeGeneres, for not helping her secure more celebrities for interviews. Frankel expected Ellen’s star name to help her book A-list actors.

According to the gossip site’s source, the freshman talk show host “is absolutely peeved that she has been unable to get a big-name celebrity to come on. Frankel was told numerous times by DeGeneres before the show premiered that she would absolutely help her in getting all of the big names in show business.”

Her show originally had a six-week trial run during the summer of 2012 in specific test markets like Los Angeles, Chicago and New York. Justin Bieber appeared on her show, so Frankel expected more star wattage once the show was picked up for a full season.

The source continued, “DeGeneres’ former booker is now working for Bethenny but he’s been unable to get Sandra Bullock, Gwyneth Paltrow or Miley Cyrus. The big-name celebrities don’t want to go on a talk show hosted by a former Bravo housewife. It’s causing major drama behind the scenes of Frankel’s show, which is struggling in the ratings.”

During her summer test run, the show was based in Los Angeles, but Frankel wanted to stay in New York to be able to settle her personal drama more easily. While New York has its own set of celebrities, most stars make their home on the West Coast.

The insider explained, “DeGeneres never promised to turn over her Rolodex of celebrity friends but it was always understood that she would give Frankel the foundation and support to get the show off the ground; the rest is on her.”

It takes a lot of hard work to build up a following, and DeGeneres could be a great mentor to Frankel if the Skinnygirl mogul focuses on the work she needs to put into a successful daytime show.

The daytime talk-show field is crowded this season with returning veterans like DeGeneres, Katie Couric and Steve Harvey leading the way. However, newcomer Queen Latifah is delivering in the ratings and the guests.

Frankel has interviewed Nick Cannon and Kelly Osbourne while the Queen has booked big guests like John Travolta and Will Smith.

It might be time for Frankel to put in some extra hours at the office.