He has a talent for playing advertising execs, and James Wolk is bringing down the house with his portrayal of Robin Williams’ Number 2, Zach Cropper, on The Crazy Ones. What else should they try to pull off in the ad world? 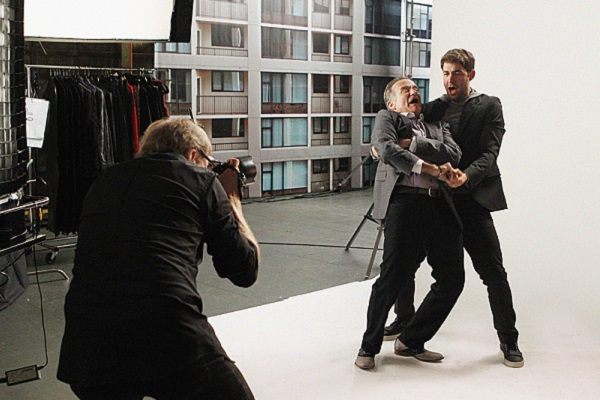 The biggest surprise thus far on The Crazy Ones hasn’t been the comedy of Robin Williams as agency owner Simon Roberts or the return of Sarah Michelle Gellar to the small screen as his daughter, Sydney. Instead, the real gem has been James Wolk and his portrayal of Zach Cropper, Simon’s right-hand man and go-to guy when everyone else fails him.

We should have guessed, given Wolk’s previous performance as Bob on Mad Men, that he would take to the world of advertising quite naturally. However, his ability to sing and dance his way into any potential commercial scenario has been more than a little surprising. From the premiere episode — when he held his own in the updated commercial with guest-star Kelly Clarkson (even singing lead!), to taking on the role of a supermodel with Simon when the “real” models weren’t getting it right — he’s proven to be the right man for the job.

After taking a look at his starring role with Ms. Clarkson, we’ll run down some other old ads we’d like to see him help the firm bring into the modern age, and how we’d like to see the scenes play out.

Kelly Clarkson sexes up a McDonald’s commercial, and Zach is there to help!

There’s not much more we can say about this. We can just hose ourselves off and move on!

Sarah Michelle Gellar gets another shot at television >>

Remember Joe Namath and Farrah Fawcett smoking up the screen for Noxzema?

It won’t matter who is actually recruited to play the parts for the updated commercial, because what we really want to see is Zach as Joe Namath and Simon playing the role of Farrah Fawcett to show the newly cast stars how it’s done. Simon’s hands will be getting a little crazy as he whispers his sexy girl-talk into Zach’s ear. Can you imagine the outtakes from that bit?

There was a time when O.J. Simpson was something other than a criminal.

Since O.J. Simpson was a famous running back, we’ll give the part to Reggie Bush. Simon is never happy with the first run at any of his shoots, so he’ll ask Zach to come in and save the day. Imagine Zach sprinting through the airport on his way to the Hertz counter, with a big Zach smile plastered on his face. He’s practically a superhero already!

Robin Williams’ best television performances before The Crazy Ones >>

If nothing else, we want to hear this entire cast saying “whassup?!” Zach will lead the team and Simon will tear it up. Even Sydney, Andrew (Hamish Linklater) and Lauren (Amanda Setton) can get in on the action. It would be fantastic if Miley Cyrus, Rhianna, Lindsay Lohan and Britney Spears would guest for an all-female remake of the whassup Budweiser classic (Miley will be 21 by the time the episode airs!).