For the time being, Khloé Kardashian is afraid to file for divorce due to Lamar Odom’s state of mind. However, the reality star will split form her drug-addicted husband when the time is right and will have a simple divorce. 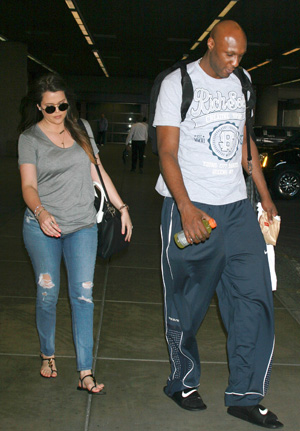 Lamar Odom‘s drug problems continue to escalate and his wife Khloé Kardashian fears for his life. She wants to split, but is afraid he may commit suicide if she does. But when the time is right, the embattled couple will have a simple and easy divorce.

According to sources close to the famous pair, Kardashian is ready to pull the plug on her marriage to Odom, TMZ reported. When she does, it will actually be a quick divorce with “NO disputes because everything is predetermined by their prenup,” the site added.

The supposed prenup agreement will keep the couple’s assets separate, so there should be no issues with properties and money. Plus, being that Odom is so out of it due to his drug use, he may not be deemed competent to make any legal negotiations in a divorce.

There are also rumors that the prenup contains an infidelity clause, which could also affect the divorce since Odom has been linked to several women during his drug-fueled escapades. But sources close to the situation told TMZ that this clause doesn’t exist in the document.

Meanwhile, Kardashian has been addressing Odom’s problems, admitting he has emotional issues on her show Keeping Up with the Kardashians. She revealed her basketballer husband is very depressed. She also said that while she really loves Odom, there’s just so much she can do for him.

Lamar Odom’s drug dealer bailed him out of jail >>

Odom has been said to be living in a drug den with two women and his best friend where he does crack nonstop. He was recently seen with his wife in a car right after her mother, Kris Jenner, announced her separation from Bruce Jenner. No word on where he’s currently living, but it’s believed he’s not living at home with Kardashian.