The rumor of Hayden Panettiere’s engagement to her boxer boyfriend has been around Hollywood for at least a few months, but she finally confirmed the news to Kelly Ripa on Wednesday. 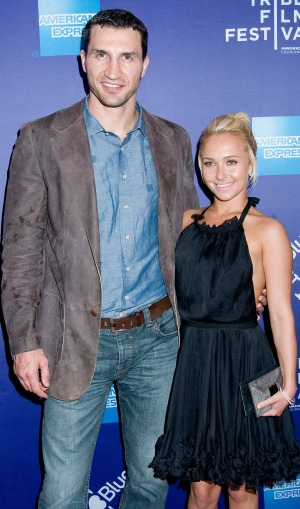 After months of wondering “are they?” or “aren’t they?” Hayden Panettiere finally made the official announcement that she’s engaged to her boxer boyfriend Wladimir Klitschko.

Panettiere made the announcement Wednesday on Live With Kelly & Michael.

The Nashville star was holding a snake when Kelly Ripa said, “I’m sort of distracted, not just by the snake, but there’s a very large diamond ring on your ring finger. I’m not sure if you want to announce anything. Does that signify anything, is that a promise of something?”

Panettiere responded coyly, saying, “It might be. I mean, I think it speaks for itself.”

Ripa then asked if the actress is engaged, and she said, “I am.”

The engagement has been rumored for months, but it’s not clear when it became official between the two. The 24-year-old actress met Klitschko at a party in 2009, and after an on-again, off-again relationship, it looks like they’re officially on again.

“It’s like the 2.0 version,” she told Glamour magazine when the couple reunited. “I’ve always had great relationships and stayed really good friends with the guys I’ve dated. It blows my mind sometimes that us getting together has gotten so much attention. It’s like, ‘Really? This is breaking news?'”

It was only a week ago that Panettiere was accused (by a tabloid) of cheating on her boyfriend with her Nashville co-star Jay Hernandez. It appears that rumor was so ridiculous, the actress didn’t even bother to respond to the claims.

Panettiere said the couple hasn’t yet chosen a date for their wedding because of her busy schedule. Nashville is currently in the middle of its second season. But since she’s obviously good at keeping a secret, we may not even know when it happens!