Robin Thicke’s parents thought he was going to be a girl, and while their son’s gender may have initially shocked them, they have been supportive of his career. 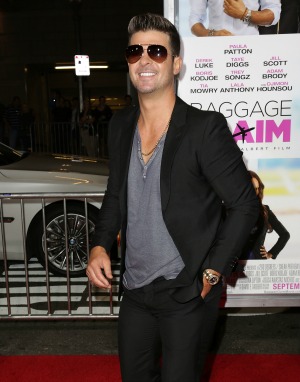 While all parents really want is a happy and healthy baby, sometimes they can’t help but secretly wish for a certain gender, and Robin Thicke has revealed that his parents were hoping for a little girl.

While they may have gotten a very talented boy instead, the singer’s parents — Gloria Loring and Alan Thicke — were so excited and convinced that they were going to have a baby girl, they had already pre-planned everything and picked out a name for her.

The “Blurred Lines” singer revealed to the Daily Star, “I was supposed to be Melissa Thicke, so I guess I was born and they said, ‘Let’s still give him a girl’s name.'”

Regardless of whether Robin’s parents were shocked at the gender of their baby 36 years ago, they have been a constant support system and inspiration to the singer.

In fact, his parents even defended his controversial VMAs performance that left everyone’s tongues wagging after seeing Miley Cyrus grinding against him.

The “Blurred Lines” singer has nothing but admiration for his parents, who are both used to the limelight. His mother is a very talented American singer-actress and his father, a Canadian actor, whose talents have served as inspiration to him.

The singer explained, “I wanted to be more like them, like my mom as singer and my dad as charmer. He’s excessively charming.”

It seems that qualities from both his parents have rubbed off on the heartthrob, because his music career has had a massive breakthrough this year and he appears to quite the charmer.