Will the war of words between Miley Cyrus and Sinead O’Connor ever cease? Miley reveals whether she plans to kiss and make up… 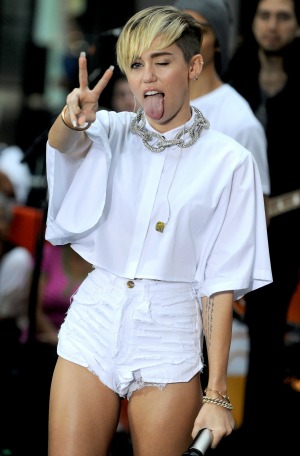 Celebrity stardom rarely comes without drama and Miley Cyrus and Sinead O’Connor have been engaged in a full-on feud.

It all started when the Irish singer took to her website to write an open letter to Cyrus, claiming she was warning the young twerker to avoid being overly sexualized and exploited by those controlling the music industry.

O’Connor wrote, “I am extremely concerned for you that those around you have led you to believe, or encouraged you in your own belief, that it is in any way ‘cool’ to be naked and licking sledgehammers in your videos.”

Cyrus then got a little nasty when she responded on Twitter by retweeting posts from two years ago that detail O’Connor’s battle with bipolar disorder and even comparing her to Amanda Bynes, who is currently being held in a treatment facility.

That said, the “Nothing Compares 2 U” singer is unable to leave the keyboard alone and has demanded an apology from Cyrus in a fourth open letter to the star.

The letter reads, “I would very much like you please to apologize to myself and Amanda Bynes for having perpetuated abuse of both of us on the grounds that Amanda has had ‘mental health issues’ and that I experienced suicidal compulsion and was open about seeking help in order to save my life.”

O’Connor continued to write, “I have no interest in the ‘feud’ which media want. There is no ‘feud’ as far as I am concerned. What there is however… Is a lot of very serious harm caused to myself and my children and probably to Amanda, and definitely to silent sufferers of your own age who may look up to you.”

The pair have been engaged in a war of words and it doesn’t appear to be ceasing any time soon.

When the “Wrecking Ball” singer was asked on Tuesday at her CD singing for her new album Bangerz in New York whether she would end the drama with O’Connor any time soon, Cyrus responded with jest, saying, “I don’t know. Are we supposed to kiss?”

Whether this marks the end of a cat fight, or not, remains to be seen, but the 20-year-old singer doesn’t seem to be too concerned with haters, as her father Billy Ray Cyrus revealed, she’s “the happiest she’s ever been.”

If you had to pick a side, would you be on team Cyrus or team O’Connor?