Waiting to get past the repeat of last week was so worth it. Episode 2 is all about establishing a history of its own, separate from The Vampire Diaries. Namely romantic history. 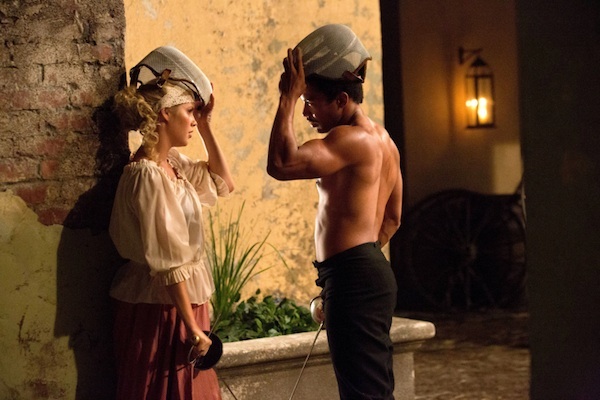 Everyone’s got a past. Our originals have 1,000 years’ worth, which is a lot of baggage.

If Episode 1 of The Originals was about laying a foundation of understanding for new viewers, Episode 2 is about establishing the relationships that will carry us through the season. Finally the good stuff! And the show transitioned quite nicely.

Here are the relationships we’re watching:

Hayley (Phoebe Tonkin) and Rebekah (Claire Holt), though resistant to one another at the start of the episode, end on a high note. Rebekah stepped in and protected Hayley multiple times. She was constantly saying things like: don’t hurt her, she’s pregnant and that’s no way to treat a pregnant lady (after ripping out some hearts, of course).

Recap of The Originals’ pilot premiere >>

At the end of the episode, Hayley thanks Rebekah, and Rebekah tells her the girls have to stick together. We’re guessing the two will face some bickering. They’re both not very nice most of the time, but they’ll find common ground to respect one another. The ties that bind them as a family might just make them the perfect BFFs.

The father and the son

Marcel and Klaus (Joseph Morgan) didn’t used to be friends. We find out this episode that Klaus raised Marcel as a son. When Marcel was old enough, he and Rebekah fell in love, but Klaus told Marcel he wouldn’t make him a vampire unless he left Rebekah. Marcel chose being a vampire.

Estranged is putting their relationship lightly.

The human, the vampire and the original

This one surprised us.

Marcel’s got a thing for the oblivious human girl in town named Camille (aka Cami). We thought it would be Klaus to fall for the blonde, for sure!

Then Rebekah comes into town and makes things even more complicated, of course. She still has feelings for Marcel, despite the bad blood between them. Marcel doesn’t share the sentiment outright, but we’re sensing the sexual tension isn’t just one-sided.

Still, it seems like Marcel will develop something with Cami rather than return to Rebekah. We’re excited to see how this relationship will pan out since Cami is such a good girl and Marcel is the epitome of bad boy!

The vampire and the werewolf x 2

Elijah and Hayley had an obvious connection before he got staked. She trusts him more than anyone in New Orleans. Hopefully, he’ll come back soon, and we can see where the two will end up.

On the flip side, Klaus and Hayley did have a little interlude tonight. Klaus recognized that the werewolf was similar to him in that they’re both survivors and fighters. It sounded like the makings of the perfect team, an “us against the world” sentiment, if you will. We’re just wondering if it will develop into more.

What about the witches?

The witches seem to be this outside force, driving more of the dramatic action and suspense than present as characters. Sophie acts as the name to represent this force, but will she be a bigger part of the story throughout the season? Or continue to live behind the scenes most of the time?

In the end, we discover the extent of Marcel’s anger issues. He wants Davina to work on discovering how to kill an original. White oak stake anyone?