Going through a breakup is never easy, but it looks like Miley Cyrus is picking herself up and doing what she does best. Her dad couldn’t be more proud of his little girl. 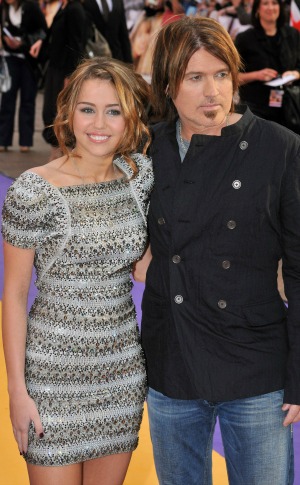 Through the Miley Cyrus/Liam Hemsworth breakup, no one stopped to think how Cyrus was feeling about all of it. Her dad, Billy Ray Cyrus, gave a little more insight into her state of mind in an interview with Entertainment Tonight on Tuesday.

“All I know for sure is I heard my daughter say today she’s the happiest she’s ever been in her life immediately following (the breakup),” he said according to the NY Daily News. “That’s when I saw Miley being so happy.”

Miley did say the same thing in her interview with Matt Lauer on the Today Show on Monday, so it’s possible her dad was only talking about seeing her on TV.

“I’m the happiest I’ve ever been in my whole life,” she told the Today host.

The singer has had a busy couple of months. She received a lot of feedback from both her VMAs performance and her very naked “Wrecking Ball” video, as well as reports of Hemsworth cheating before they were even broken up. Last week she also somehow became involved in a feud with Sinéad O’Connor.

But Miley has a lot of good things going on in her life. She successfully hosted Saturday Night Live over the weekend, and has a brand new album out. She seems to be staying positive about everything in her life.

“The most important thing is being a really good person,” she told Lauer. “That doesn’t depend on what you do on stage — that depends on how you treat people when you’re off the stage, and I know how I treat people.”

However, this bright side of Miley isn’t necessarily something that has been ongoing. Her dad explained that the happiness he is seeing in his daughter is something that disappeared for a while.

“Somewhere along the stress and strain of different things, I didn’t see her smiling as often for a little while,” Billy Ray said. “All of a sudden she’s like the sun, and when she smiles it’s light.”

Billy Ray didn’t say what he thinks about the breakup, but did say he is happy to have his daughter back.

“Everything happens for a reason and the main thing for me, as Miley’s daddy, is she’s happy,” he said.