Snooki has turned over a new leaf. These days, the former party girl is all about health. She’s a survivor who recently revealed a secret past. 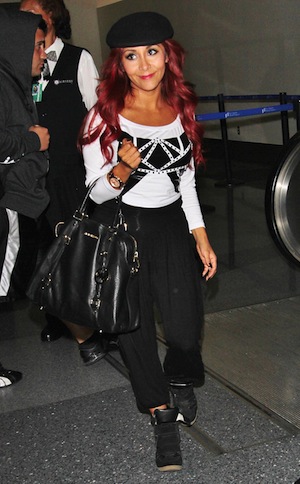 Reality star Snooki, aka Nicole Polizzi, has opened up about her biggest struggle. Before breaking out on MTV’s Jersey Shore, she was an athletic and active high school student. On the latest episode of Dancing With the Stars, Snooki revealed that during her youth she struggled with an eating disorder.

She admitted (via US Weekly), “Cheerleading was my life in high school but it wasn’t always easy for me. I started to be anorexic. There were these little girls coming up, like freshmen, who were literally, like, 70 pounds.” Mind you, Snooki herself reportedly stands at a mere 4-feet 8-inches.

Snooki’s weight loss: 42 pounds down to prove a point >>

Snooki was afraid of being replaced, so she took some unhealthy steps to fight off the competition. “I was like, my spot as a flier is going to get taken away. So I ended up starving myself,” she explained. “I started eating one salad a day, and then it became, like, one cracker a day, and then it became just one grape a day. And then… just not eating at all for three days. It was a really, really bad time for me.”

Thankfully, Snooki is no longer interested in starvation diets. As a mom to a beautiful son named Lorenzo, family is her priority. These days, vanity takes a backseat to health and happiness. Snooki spends her time eating right, exercising and dancing the night away.

Dancing with the Stars airs every Monday at 8/7c on ABC.