Drew Barrymore’s husband better be ready for more kids because his wife is ready to have baby No. 2! 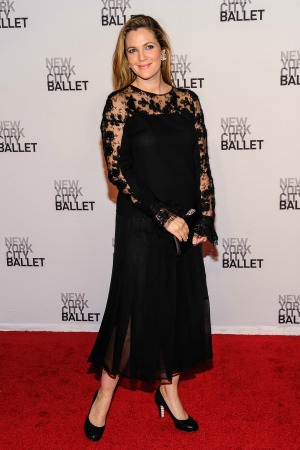 The partying days of Drew Barrymore are long behind her as the actress embraces a role that fulfills her the most, motherhood. On Monday night, the 38-year-old star bragged about her 12-month-old daughter to Jay Leno on The Tonight Show.

During the interview, she revealed that there are probably more kids in her future.

Leno asked, “Normally I wouldn’t ask a woman this question, but I know you and I think I know the answer, so it seems okay… Do you want to have more kids?”

There was no hiding Barrymore’s smile as she shared, “Very much. Right away, yes.”

The former child star had a very unconventional childhood with her mother actually dragging her to clubs at the height of her E.T. The Extra-Terrestrial fame. That exposure to adult nightlife led the actress down a destructive path of alcohol and drugs at a very young age.

It’s no wonder The Wedding Singer star craved normalcy and a quiet family life. She found that in husband Will Kopelman.

She reminisced about their June 2012 wedding, “He’s just a wonderful man. It was really one of those perfect days.”

While they are marking their daughter’s big milestones like walking and talking, Barrymore is ready for more babies.

“I grew up as an only child, and although that really works for some people and for some parents that’s the way they want to do it… I want to be the Griswolds [from National Lampoon’s Vacation movies],” she said. “I want the kids in the back rolling their eyes at mom and dad. I want Rusty and Audrey, theme parks and the whole nine.”

It looks like little Olive won’t be an only child for long.