Nina Dobrev and Derek Hough further confirmed their new relationship after they stepped out together in Los Angeles over the weekend. 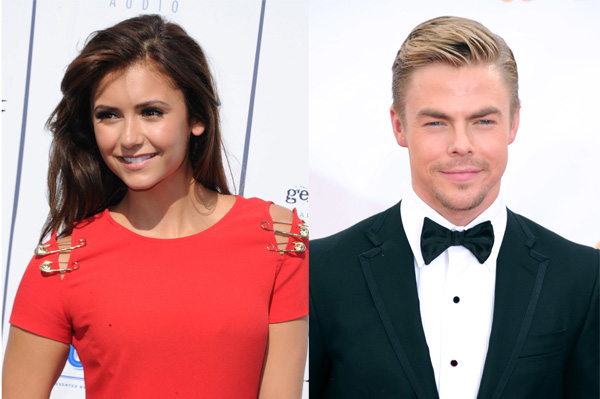 Taking their new romance out in public, Nina Dobrev and Derek Hough were spotted together in Los Angeles on Saturday. Accompanied by a few friends, the Vampire Diaries vixen and the Dancing With the Stars pro hit up Universal Studios Hollywood Halloween Horror Nights for some scary fun.

Dobrev and Hough quickly separated when they saw the cameras approach, but the couple was caught in the act. They appeared not to be very concerned, however, as both laughed when paps snapped away.

Amidst the couple’s group was actress Lily Collins and Hough’s fellow dancing sister, Julianne Hough, who happens to be Dobrev’s BFF. Apparently, after Dobrev broke up with longtime boyfriend and Diaries co-star Ian Somerhalder, Julianne hooked her brother up with the 24-year-old actress.

Later that same night, Dobrev and Hough were seen again trying to dodge photographers once more as they arrived at Hollywood’s Roosevelt Hotel together.

Dobrev recently told Us Weekly that she was looking forward to being single for a while after her split from Somerhalder. “I’m just discovering different sides of me and growing, and then I’ll figure out what I like in a man when I see it.” But she didn’t wait long, as she and Hough are rumored to have been dating for a while, and may even be getting serious.

Nina Dobrev on dating: “I’m not a one-night-stand kind of girl >>

The couple first gave signs of a blooming romance after Hough won the Emmy Award for Outstanding Choreography. Shortly after he snagged his trophy, Dobrev wrote on Instagram: “@Derekhough !!!!!!!! #EMMYWINNER I cant express in 140 characters how unbelievably excited+incredibly proud I am of you. You deserve this :)”