Cody Simpson is hanging out on Twitter with SheKnows on Oct. 18. Find out how to tweet your questions to the pop star. 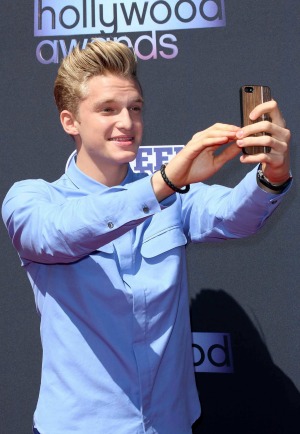 Tweet us your best questions by using #SheKnowsCody and join us live on Oct. 18 at 4 p.m. PDT to hear the answers to all your questions during our Twitter takeover with Cody Simpson!

Cody Simpson is taking the music world by storm, and will be taking over Twitter on Oct. 18. The Aussie singer is hanging out with SheKnows in a Twitter takeover.

The 16-year-old singer moved to Los Angeles three years ago, and hit the ground running. He released his first song the same year, and has since embarked on a whirlwind takeover of the music industry, signing with Justin Bieber‘s manager and going on tour with the pop star.

Simpson released his debut studio album in 2012, and followed up in 2013 with Surfer’s Paradise, which was his first to debut in the top 10 on the Billboard 200 chart.

Simpson has nearly 6 million followers on Twitter and more than 151 million views on YouTube. You can hear his new song “La Da Dee” in the film Cloudy With a Chance of Meatballs 2.

In the past couple of years, Simpson has been nominated at the Radio Disney Awards, the Kids’ Choice Awards, MTV Europe Awards and others. He will be appearing at Hub Network’s First Annual Halloween Bash on Oct. 26. Saturday Night Live‘s Kenan Thompson will host the “first-ever Nationwide Halloween Costume Competition,” according to the network. Martha Stewart has signed on as a judge.

More than just a pretty face (and talented musician), the singer is also an author. He’ll soon be touring around the U.S. to promote his new book Welcome to Paradise: My Journey. The book follows all Simpson has done by the young age of 16. The book tour kicks off Oct. 21 in Paramus, New Jersey.