ABC Family is looking for a ’90s comeback with its new sitcom pilot Mystery Girls by tapping the ladies of 90210 to star. 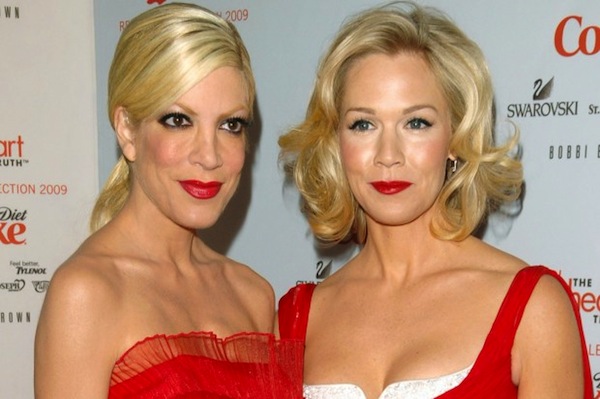 Get out your scrunchies because the ’90s are coming back in full force.

That’s right, ABC Family announced today that Jennie Garth has signed on to the pilot Mystery Girls that already has Tori Spelling attached to star and executive produce.

Mystery Girls follows a former starlet who is roped into solving crimes with her former mystery TV show co-star when a witness to a crime will only speak to the infamous “Mystery Girls,” which was the highest-rated program of the ’90s. Anyone getting flashbacks of The Adventures of Mary-Kate and Ashley here?

Anyway, Spelling will play Holly, who is desperate to find fame once again by using her acting and “crime” experience to open up a detective agency. Thing is, the agency would be nothing without her former co-star Charlie, played by Garth, who has since become a housewife. Seems like Holly won’t have an easy time convincing Charlie to jump onboard and hilarity will follow.

Stranded! Tori Spelling roadside with 4 kids and a pup >>

The pilot has already been written and filming is scheduled to take place this November.

Garth and Spelling were last on-screen together when they both appeared in the first season of The CW’s 90210 reboot, in which they reprised their Donna and Kelly roles.

Though the two have appeared in numerous TV movies and series since starring in 90210, neither has been able to recapture the fame from the show. Could Mystery Girls be their comeback to the TV spotlight?

What do you think of the new pilot? Will you watch?