Prince Harry is ready to give up on his partying ways and propose to girlfriend Cressida Bonas. The younger royal wants what his brother, Prince William, has with Kate Middleton. 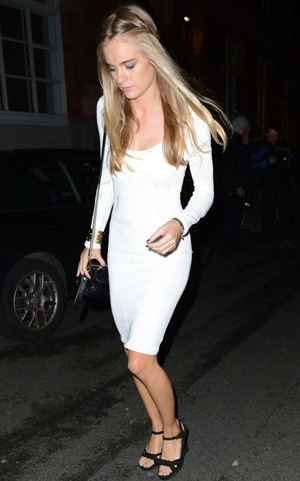 Partier no more, Prince Harry seems to be ready to let go of his wild ways and propose to his girlfriend, Cressida Bonas. He wants to settle down and have what his brother Prince William has with Kate Middleton.

Apparently, things are getting serious between Harry and Bonas and the young royal is ready to pop the question. According to an insider, the pair has reportedly been talking marriage already.

“Seeing Prince William and Kate get married and settle down has had a real effect on Harry,” the source told E! News. “He’s just seen how happy they are and he’s realized that he wants that too.”

Bonas is herself ready to get serious with Harry, but wants to stay out of the limelight. “They want to remain very much as they are — with a private life away from the cameras. For now they want to enjoy as much time together before the seriousness of their relationship becomes public with announcements,” the source added.

Friends of the couple say that Harry and Bonas are inseparable these days and they are “rarely out of each other’s sights” and that both of them would like to take things to the next level. “He hasn’t proposed yet, but it’s only a matter of time,” another friend told E!.

However, other pals of the young prince say that they are surprised things moved so quickly with Bonas.

“At one point it seemed like he wasn’t over his ex, Chelsy [Davy],” a friend said. “But now he’s fully all about Cressida. He says he wants her to be his wife  — this is it.” So while it’s been a fast development, pals are saying that it’s getting increasingly serious between them and another royal wedding may be in the works as early as next summer.

Meanwhile, Harry and Bonas have been seen out and about on some hot dates together recently. The couple attended an intimate concert in Notting Hill last week. Then, just a day later, Harry and Bonas were photographed while going to see a performance of The Book of Mormon at the Prince of Wales Theatre.