Eminem is now the father of a queen… a homecoming queen, that is! Hailie Scott was just voted into the role by her classmates at Chippewa Valley High School. 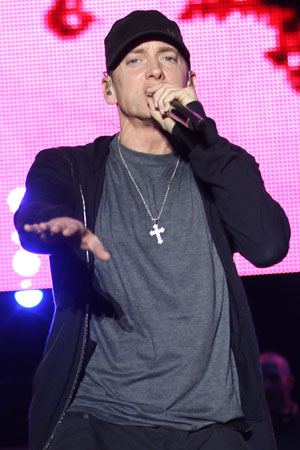 According to the Macomb Daily News, the Chippewa Valley High School student was voted into the role on Oct. 4. Her “Bezerk” dad was there to watch, but he holed up inside the school to keep the attention on his teen daughter.

Own Eminem’s childhood home for the low price of $1 >>

“Hailie came out with her mother, Kim (Scott), when she was introduced with all the other kids, but her father watched from inside the school because he didn’t want to cause a scene — he wanted Hailie to have her own moment,” one parent told the newspaper.

“He opened the door and looked out like — ‘That’s my daughter!’ He just looked like a proud father,” another parent said.

Hailie seems to be a normal teen — complete with a Twitter account. She raised a few eyebrows last December when it was alleged that she called out Taylor Swift for “whoring” around with One Direction’s Harry Styles.

Eminem goes “Berzerk” on a Kardashian! >>

“Dear @taylorswift13, please stop whoring around with every guy you see,” she purportedly tweeted. “We all know you’re only doing it so you can make another album.”

She added, “I, am never, ever, everrrrr, listening to your music againnnn @taylorswift13. LIKE EVER.”

The tweets reportedly came from an imposter. Em’s famous daughter prefers to stay out of the spotlight — save for guest spots on a few of her dad’s songs — and her peers reportedly treat her the same as everyone else.

“I think all of the kids in the district have shown respect to their family and just let her live a normal life here out of the spotlight,” one parent told the Macomb Daily News. “I think that speaks very highly of the Chippewa Valley community to not try to take advantage of their fame.”