Halle Berry and Olivier Martinez are the proud parents of a new baby boy, and they have had a name ready for his arrival for quite some time. 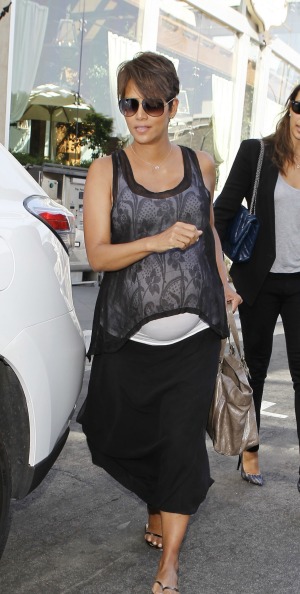 Halle Berry gave birth to her son over the weekend, and we now know the name of her and Olivier Martinez‘s new baby boy! The couple named their new son Maceo Robert Martinez.

“They chose it because it means gift from God,” a source told E! News. “Olivier wanted to give a nod to his Spanish roots. They picked the name a while ago, they love it.”

Maceo was born Saturday at Cedars Sinai Hospital in Los Angeles, and dad and his sister were both there to welcome him into the world.

Back in June, Martinez talked about the impending birth with People.

“My son will remain an American, but I will remain French,” he said. “I remain a Frenchman in America, but I adapt to American culture. I feel good there — but I’m still a foreigner. My son will be an American.”

Berry also talked about the pregnancy back in April, and admitted a second child wasn’t exactly planned.

“This has been the biggest surprise of my life, to tell you the truth,” she told People. “Thought I was kind of past the point where this could be a reality for me. So it’s been a big surprise and the most wonderful.”

The new baby is Martinez’s first child, and Berry’s second. She has a 5-year-old daughter with her ex.

The couple married in July, shortly after making the announcement.

According to TMZ, the modern-day version of Maceo is Matthew, and Robert is Martinez’s dad’s name. It looks like their family is now complete. Congrats to the couple!