Everyone is talking about HAIM, but no one’s really introduced you to the girls. We’d like to change that. 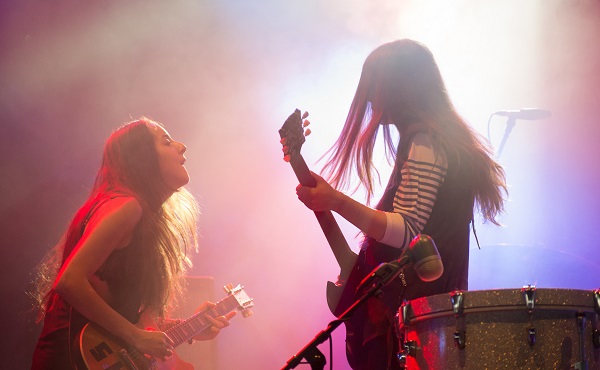 HAIM is the latest (and we think greatest) girl group to hit the music scene. They sound like a flashback to ’80s pop and R&B as if sung by Stevie Nicks and they look like Urban Outfitters models. And did we mention they’re sisters? HAIM is made up of the three sisters Haim: Este, 27, Danielle, 24 and Alana, 21.

Billboard lists their favorite 21 artists under 21 >>

Born and raised in the San Fernando Valley, California, the three sisters grew up listening to their parents’ music. Their mother, who always aspired to be the next Joni Mitchell, taught Danielle to play guitar by teaching her songs from that most famous of folk songstresses and bands like The Beatles. As the girls grew more invested in their music, they began to play in their parents’ cover band, learning more of their parents’ music.

When they were old enough, Este and Danielle struck out on their own and started the mildly successful band the Valli Girls. The ’80s rock-inspired Valli Girls actually had an album appear on the soundtrack for The Sisterhood of the Traveling Pants.

Eventually their baby sister Alana was old enough to start going to shows with them and The Valli Girls group of friends transformed into the sister group called HAIM.

In a short matter of time, the girls found themselves on the road with the likes of Ke$ha, Jenny Lewis and Edward Sharpe and the Magnetic Zeros. Just a year and a half ago, they released their first recording, a three-song EP called Forever. The EP pulled in tons of press attention and even earned the sisters a slot at 2012’s SXSW.

Last week, they released their first full-length album, Days are Gone, and it’s fantastic. To give you a taste, listen to their first single off the record, “The Wire.”

This will sound like an easy comparison, but there’s definitely a Wilson Phillips vibe to their harmonies. HAIM is infinitely more dance-inducing, however. Listening to Days Are Gone is like spending an hour at the club, sipping on champagne. Every song will bring you to your feet with your hands above your head. You’ll bask in the last few notes with the dewy glow of sweat on your skin and sing, “With my eyes closed, I’m leavin’ it all behind.” Whether it’s the dance floor or your bedroom carpet, “behind” is exactly where HAIM will have you leave all your issues. It’s pretty obvious that no one knows the importance of dancing the way you feel like the Haim sisters.

Growing up in such a musical household has clearly paid off and, and as in love with Days as we already are, we’re even more excited to see what’s ahead for HAIM.

She rocks: The Pretty Reckless is “Going to Hell’ >>