Anchorman‘s Ron Burgundy is putting his mustache to good use. Will Ferrell’s alter ego appears in the latest ads for the new Dodge Durango. 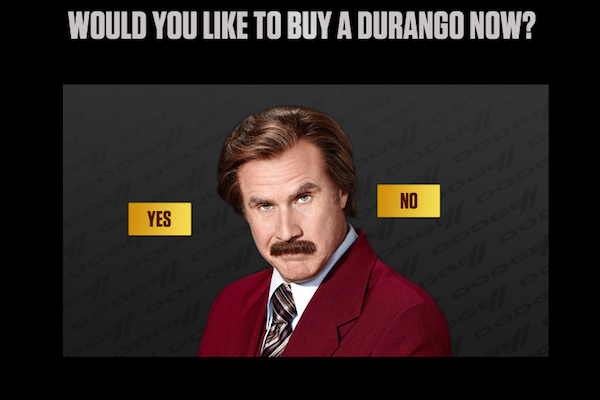 Ron Burgundy is no stranger to television. The camera loves him. He has the charm, the style and a mustache that sets him apart. That’s why Dodge has hired him to be their new spokesperson. The fictional anchor appears in multiple ads for the 2014 Dodge Durango.

Paramount Pictures has hit a marketing goldmine. While Dodge gets a popular spokesperson for their truck, the studio gets cross-promotion for their upcoming film, Anchorman 2: The Legend Continues. Actor Will Ferrell brings his A-game to these ads making you yearn for a new ride.

“Ron Burgundy as the new Dodge Durango spokesperson brings together two iconic American legends,” said Josh Greenstein, CMO of Paramount Pictures. “This campaign was an unprecedented opportunity to collaborate with our filmmakers to create new original content and distribute it worldwide in advance of the long awaited Anchorman sequel release this December.”

He continued, “With the personal involvement of Will Ferrell, our writer/director Adam McKay, the comedy team at Funny or Die and the Dodge creative team at Wieden+Kennedy, we were able to create a truly epic partnership.”

Check out the four TV spots below: