We all remember Ed Westwick’s portrayal of bad boy Chuck Bass. Now the sexy Brit is on the big screen, playing Romeo’s rival Tybalt in the latest adaptation of Romeo and Juliet. We sat down to with Ed to see if he plans to return to TV any time soon. 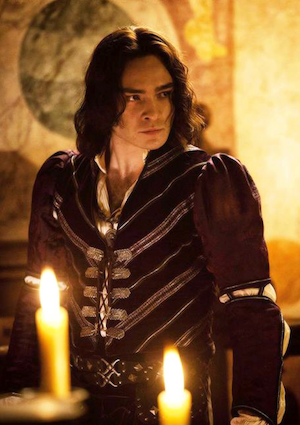 Actor Ed Westwick seems like the perfect choice for the role of Tybalt, Juliet’s cousin and family drama instigator. But we wanted to know if he would have prefered to play Romeo. His answer? “Honestly, no.”

It’s surprising that he’d choose the fighter over the lover, but Westwick told us, “I’ve always admired Tybalt. To give you some background, I first came across this project around three years ago and I said to my representation, I have to play this part! Please help me get this part. And, fortunately, I had the opportunity.”

We asked him about his favorite part of making the film. “Absolutely everything,” said Westwick. “To deal with a piece of work that was adapted by Julian Fellowes (Downton Abbey), we all know he’s an absolute genius.”

Westwick said he also really enjoyed filming in Italy, “To be in the palazzos and be surrounded by pieces of history and working with a cast and crew who were lovely — it was inspiring.” Wow, it does sound wonderful.

While one of the movie’s themes deals with forbidden love, this Filthy Youth rocker says he doesn’t take a lot of risks when it comes to matters of the heart.

“Unfortunately,” said Westwick, “I safeguard myself a bit more than Romeo and Juliet. They fall head over heels at first sight, so I haven’t experienced anything like that, I’m afraid.”

Because many of us remember the Baz Luhrmann version of R&J, starring Leonardo DiCaprio and Claire Danes, we asked him what he thought will make this new version of the classic romantic-tragedy exciting for audiences. Westwick made it clear that this script doesn’t stick to Shakespeare’s often dense iambic pentameter. The dialogue has been freshened up to make it easier to understand.

“It’s an adaptation that will, I think, open up the language and the story while conveying the true essence of the original work,” said Westwick. “Through doing the adaptation, we achieve something that really makes it attractive to every audience. It makes it a little more accessible.”

On working with Homeland‘s Damian Lewis, Westwick told us that during the first bonding session with the cast, they all went out for dinner and drinks, “And I couldn’t help myself but tell him how much of a fan I am of Homeland. He’s amazing and inspiring. For me, he steals the show when he’s in the bedroom telling Juliet she will marry Paris. Damian’s brilliant in that.”

We told Westwick how much we missed seeing him on TV every week and we asked if he’d ever return to the small screen. “I never say no,” he told us. He added, “There’s a lot of fantastic work coming out on television right now. And, obviously, anybody would be lucky to be involved in some of these productions, but for now, I’m enjoying trying to work on films, experiencing new characters and new environments and that’s what I’d like to do right now.” He did, however, admit he had a fantastic time working on Gossip Girl.