Justin Bieber just released a new song called “Heartbreaker” and it seems to be about his split with Selena Gomez and his continuing love for the pretty singer. 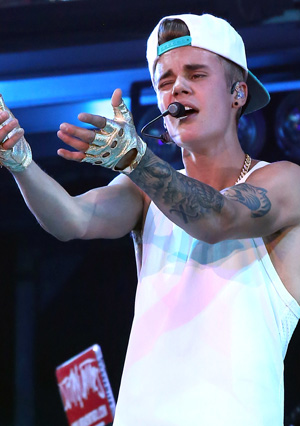 In his new song “Heartbreaker,” Justin Bieber details his recent experience when he endured a hard breakup. This can only mean that the song is about Selena Gomez, since she’s the only one he broke up with recently.

The song is very sentimental, with lyrics that are very detailed and straightforward about his feelings. When the song was released, Bieber wrote an explanation along with it, describing what the tune is about.

“It’s a song for people going through heartbreak — like I was when I wrote it,” Bieber said. “It means so much to me to be able to share what I was, and still am, going through, with my fans.”

Further hinting on who the song is about, Bieber added that he’s “very proud of this song and I hope it gives my fans some insight into my heart.”

The song’s lyrics say it all, going into the probable reason for his breakup with Selena — seems she initiated it — and how he still holds a big fat candle for the “Come & Get It” singer. Even after his recent struggles such as fighting with the neighbors, parading topless and yelling at photographers, Bieber thinks he can still be a good fit for Gomez.

“Despite all the imperfections of who I am, I still wanna be your man. I know it hasn’t been easy for us to talk with everyone being around,” the song says. “I want you to know that I still love you.”

Then, the lyrics go on with the chorus: “I know that I don’t wanna lose your love oh baby, oh baby.”

So, while the song in itself would sound just like any other one of Bieber’s cutesy love hits, it’s what he said in the introduction to the song that makes it clear who it’s about. While the two broke up several times, the 19-year-old pop idol had a very public permanent split with Gomez a few months ago. This would correlate with the time frame of when he probably wrote “Heartbreaker.”

Question is, will Gomez take the Biebs back now that he’s professed his love for her with this sweet song?