Miley Cyrus says Matt Lauer is way too old to be sexual, but the 20-year-old claims she is the perfect age for twerking. 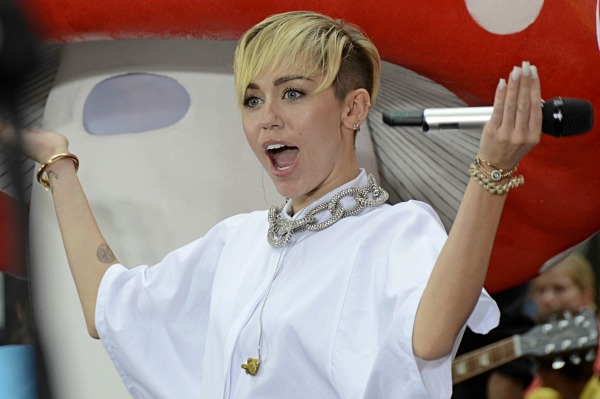 “Sexual” is probably not the first word that springs to mind when you think of Matt Lauer, but is it because he’s just too old? Miley Cyrus thinks so.

In an appearance on Today, Cyrus talked about her controversial new image and said it’s not a phase — it’s who she is, but old people like Lauer need not apply.

“I think it’s only hard if you’re trying to be something you’re not,” she said. “Being who you are is really easy if you’re really true to that. I heard when you turn 40 things start to go a little less sexual. So probably around 40, I heard that’s when people don’t have sex anymore. I guess maybe around then.”

When Lauer asked the pop star how old she thought he was, she said 40. Flattered, he corrected her and said he is actually 55.

“I don’t ever really plan to offend people, but sometimes that just happens, because I think people [aren’t] open to what they don’t understand, but that’s why what I’m doing is for my fans, because they’re all really young, so they understand what I’m doing.”

Lauer also asked the “Wrecking Ball” singer about that feud with Sinead O’Connor, but Cyrus said there are no hard feelings.

“I think she is an incredible artist and I was inspired by her for my ‘Wrecking Ball’ video, which started the whole thing,” she said. “I don’t know how someone can start a fight with someone that’s saying, ‘I respect you and love what you did’ [responding with] ‘You suck and I don’t like you.'”

“That was crazy, but I’m [still] a big fan [of O’Connor’s]… so it doesn’t really matter. It’s all good. You can write as many open letters as you want. That’s what blogging is. I get open letters every day. It’s nothing too new for me.”

“For me, the most important thing is being a really good person and that doesn’t depend on what you do onstage,” she said. “That depends on how you treat people when you’re offstage and I know how I treat people, so I’m not too worried about it.”