Jessica Simpson posted a photo of herself and her new baby, Ace Knute, looking gorgeous without any makeup on. 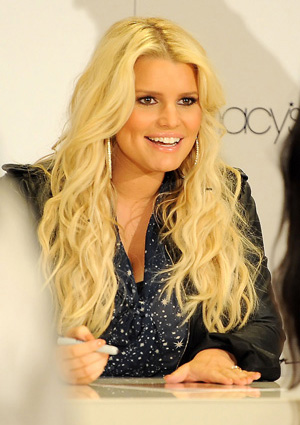 To celebrate her son’s three-month birthday, Jessica Simpson shared a photo of herself posing with little Ace Knute where she looks amazingly pretty, makeup-free.

In her post, which Simpson tweeted over the weekend, she put a pair of black & white photos side by side featuring her holding the baby on two separate occasions. In both pictures she appears to have no makeup on, but looks gorgeous all the same.

Jessica Simpson says no to sex >>

One shot shows her with her hair pulled up as she and Ace Knute look at the camera. In the other, Simpson has her hair down and she and baby are much closer to the camera. Written across the bottom of the photos in block letters is: “3 Months.”

While the photos were mainly head shots, Simpson does appear slimmer around the face, looking like she’s dropped a lot of the baby weight already. The fashion mogul came under fire when she got pregnant for the second time while in the middle of her gig with Weight Watchers last year.

However, the singer-actress is already working with the weight loss company to shed her post-baby pounds once again. “We were thrilled to welcome Jessica back on the Weight Watchers program in August,” a company spokesperson told Yahoo’s omg!.

“With a toddler on the run and an infant to look after,” the spokesperson added, “we know she needs a plan that’s simple and fits into her life along with the support that’s so important to moms with young children.”

Simpson actually dropped more than 40 pounds when she began the Weight Watchers program after the birth of her first baby. But she had to put a quick stop to her point-counting after announcing she was pregnant again. She did, however, continue her work with the popular diet program company.

The 33-year old country pop star quickly gained weight again during her second pregnancy. But as her new makeup-free photos reveal, the blond beauty is not only looking fabulous but is well on her way to looking slim and trim once again.