Charlize Theron showed she’s one tough cookie when she refused to make a fuss about the corrective surgery she was forced to undergo for a neck injury. 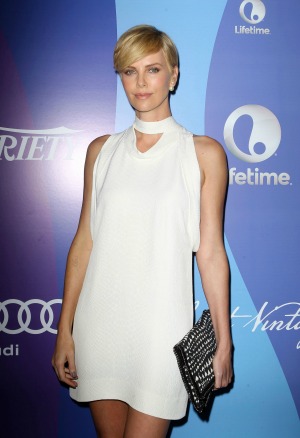 Acting can be a dangerous business as Hollywood star Charlize Theron found out.

The Prometheus actress recently had to undergo spinal surgery through her neck after sustaining a nasty accident on set. Ouch!

Though this was not a recent accident, the Oscar-winning actress was injured several years ago on the set of 2005 action movie Aeon Flux.

However, the pain had been increasing over the years and it was finally time for the blond beauty to take action.

Theron can now be seen sporting a new fashion accessory, a neck bandage! Pictures were snapped of the stunning actress with her neck bandage on Friday, when she attended Variety‘s 5th Annual Power of Women event in Beverly Hills.

The Monster actress is certainly not looking for sympathy about her surgery and does not want the world to make a fuss over her. Theron’s elegant appearance at the event, which saw her in a beautiful white Stella McCartney gown, complete with neck scarf was an attempt to hide her neck bandage from the public eye.

A source revealed to Us Weekly, “Charlize got injured on a set and broke a vertebrae years ago. It’s been bothering her a lot lately so she had surgery to correct it and they had to go through her neck.”

“She will be totally fine. She plans just to hang out and rest all weekend and recuperate.”

A second source commented on Theron’s appearance, saying, “She’s got a small Band-Aid on her neck. She kept fussing with the white scarf. She [was] wearing to cover it, but it was poking out and visible.”

Luckily, it was nothing too serious and the mother of one will make a full recovery very soon.