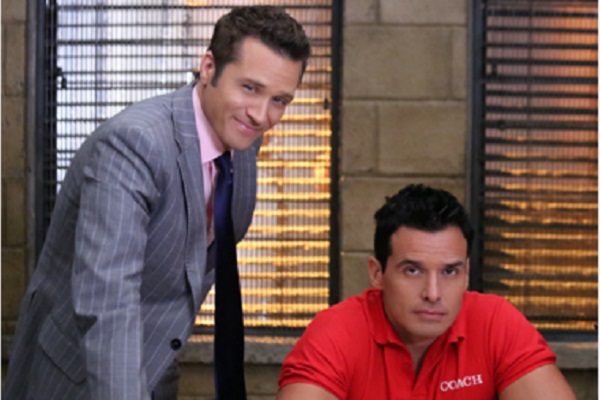 This week on Castle, Ryan (Seamus Dever) and Esposito (Jon Huertas) will be working a case that takes Ryan back to his teen years when a star of his favorite ’90s TV show Too Cool for School turns up dead. He’ll go a little fanboy when he gets to meet the co-star of the series, Ramon Russo (guest star Antonio Sabato Jr.), and a little crazy when Beckett (Stana Katic) and McCord (guest star Lisa Edelstein) burst into town to take over the investigation.

SheKnows had the opportunity to talk with both Seamus Dever and Antonio Sabato Jr. about the episode, working on Castle and what’s different about the dynamic on set this season.

SheKnows: So tell me, how’s it been on set this year? Is it a different vibe with Beckett being in D.C.?

Seamus Dever: Yeah, you know, the first couple were pretty quiet. I barely worked any days, and that’s just sort of practically thinking when you think about it, right? I think I worked maybe one or two days on the first couple episodes. Usually I come back to work and it’s just boom, boom, boom, and we’re doing it hard and heavy, every single day, late at night, those sort of things, so coming back to work was sort of a little bit quiet. But then, now it’s sort of back to normal. And, hopefully I’m not giving away too much for people who can think about what that means for the cases.

SK: What was it like having Beckett and McCord in the precinct for the first time?

SD: It was weird. I mean, Lisa’s fantastic. Just sort of speaking to having Lisa back, Lisa’s great. I had worked with her years ago on an episode of Without a Trace where we were both guest-starring and it was great to connect with her. We work with a lot of the same animal charities, like No Kill LA and Best Friends Animal Society, we’re both vegetarians and we have the same publicist, so we have a lot in common. So it was great to reconnect with her. But as far as her character coming on it was like, “Wait a minute. The Feds are coming and taking over our case and Beckett’s coming back and she’s taking over our case?!” So it wasn’t even like a matter of, “Oh, what happened to you, Beckett?” It was like a case of, “Wait a minute, what are you doing back and why are we now assisting you on our case?” It was a little bit like she came to the precinct and she kicked down the doors; that’s pretty much the way it was.

SK: It seems like you all have a great offscreen chemistry as well as on-screen. Did you play around with that at all?

SD: It was pretty much the first time I had seen Stana after like a month. You know, we had come back from hiatus and we came back to work a little bit but we really didn’t have any long scenes. I think I was on the phone a couple times for some of those scenes, so it was actually one of those things where we finally got to see each other and catch up with where we are and think: wow, Season 6. Did we ever think we’d make it this far? It’s kind of crazy.

SK: Did you get to show off your swaddling?

SD: [laughs] I got to practice. There are a lot of good YouTube videos out there and I went to the very first one and did some swaddling practice with my beagle, and my beagle loved it for some reason. I expected her to hate it, but she let me swaddle her and hold her and everything, so this was my practice. Thanks! I never tried that before, but I thought, I’m going to try that. It’s all part of the research of being an actor.

SK: What’s special about the episode “Need to Know” and Ryan’s role in it?

SD: It’s the case of Ryan being a fanboy of a Saved By the Bell type show and it’s called Too Cool For School, and Ryan watched it probably every Saturday growing up and thought it was the best thing ever because it was about kids in high school and there weren’t very many shows like that. There was the cool guy jock character and the nerdy character and Ryan identified with both of them. Well, the nerdy character, Dewey — the actor playing him — is found dead and it’s up to sort of him to take the lead on this, because they’re in charge of these investigations. Ryan takes this one a little more personally than some of his other investigations and the fact everyone’s trashing this Too Cool for School show. They think, “Oh it’s terrible, the writing’s awful,” and there’s a catchphrase by one of the characters, “Hubba hubba,” that Ryan still thinks is hilarious. There’s a wonderful scene where they go to the actor who played Dewey’s agent’s office and they get to relive some of those moments because the agent is a big fan of Too Cool for School as well. So there’s a lot of fun that Ryan gets to have, and he gets to meet some of these actors and since it was one of his favorite shows as a kid, he gets to act like a kid as he investigates the crime as well.

SK: Does everybody make fun of him? I imagine Castle, at least, razzing him a little for his love of the show.

SD: Yeah, because they read some of the script and they say, “Can you believe that was his catchphrase? ‘Hubba Hubba.’ Ha ha ha. That’s hilarious.” So it’s a lot of fun, because Ryan doesn’t often get to be on that side of sort of championing something that most people think is crap.

SK: What are you looking forward to as the season pushes forward?

SD: I’m looking forward to seeing where this whole daddy thing goes with Ryan. Every year we also do an episode where we learn something more about Ryan. It’s usually something he can do or something in his past, so I’m looking forward to that, as well. I hope there is another one of those episodes coming down the road for us, because I think it’s always fun to learn a little bit more, because Ryan’s sort of an open book with a lot of things in his life. Or, he’s a blank slate. I wanna be an open book, but right now he’s a blank slate. So hopefully we explore more of that, because I think there is a lot more we can find out about Ryan.

SK: Being a new daddy gives him a lot of material to play with.

SD: I find it hilarious when friends of mine have children, they are always tired and falling asleep. There’s something that’s fun to play about those things, so hopefully we’ll get to have some fun with them.

SheKnows: What can you tell us about Ramon Russo?

Antonio Sabato, Jr.: Ramon Russo used to be part of a TV show called Too Cool for School back in the early ’90s and so Castle (Nathan Fillion) has to go and hunt and try and figure out what happened. One of the leads on this TV show got killed, and so they’re coming to talk to my character by the name of Ramon Russo, and he’s going to talk about what happened. That’s all I can really say. I can’t talk about too much of it.

SK: You’re on the first episode where Beckett comes back to her old precinct. What was the dynamic like on that particular episode?

AS: It was great. You know, these actors and the cast, they’re wonderful. They’ve been around there for so long and it’s written so well that you just can’t go wrong. It’s a really good setup. They love going to work — big smiles on their faces — you know, we’re across the street from Paramount Pictures, we’re right there, in the center of Hollywood. You can’t complain. It was just a lot of fun working on the show. I’ve heard so much about Nathan, and we have so many people who know us and we have a lot of people in common. So it was meant to be that we finally met and got to work together and we just had a lot of laughs. It was just a good week.

SK: I was wondering if there was as much competition with the actors backstage as there was on-screen with that particular episode, since they had all been out of the loop so long.

AS: No, the competition is really within yourself to, you know, you have to be ready, you have to know your lines, you have to be on top of your toes. Because it’s a really well-written show and you want to shine. You want to do your work and everybody’s working hard and it’s just a really great set. If I have to go back to a set, this would be a set, this would be one of them. You know, the writer — Elizabeth Beall — the way they write is just awesome. That’s why the show has been on so long. It has a lot to do with writing. I mean, the character of Castle is a writer and you have to see the show through the eyes of Nathan, so he does an amazing job and so does the rest of the cast. It was just awesome being a part of it.

SK: Did you get to have a lot of scenes with Nathan Fillion?

AS: Yeah, I got to have a few scenes with him. It was just great. We had a scene downtown and it was really cool working with him on location and just meeting him for the first time, because we kind of knew about each other and knew our history. We kind of knew each other because, like I said, we just had a lot of people in common so it was like, “Hey man, how you doin’?” It was like a fresh start. It was nice.

SK: Do you think that your character will get to go back?

AS: I can’t talk about what happens to him, but anything is possible in shows like this, so you never know. I can’t reveal too much. They’ve tied my hands. Behind my back!

SK: What’s up for you next after this?

AS: I’ll just go back and look for jobs, put myself back on the market. One thing is working all the time, and one thing is working on stuff like Castle. I had a chance to work on really good shows, and I’d like to keep doing that. You know it’s been really fun. Rizzoli & Isles, CSI and Castle are shows I want to be a part of, so I’m just going to keep pushing and keep trying to stay on this path.

Be sure to tune in to see Seamus Dever and Antonio Sabato Jr. in action on Castle on Monday, 10/9c on ABC.