Carson Daly is going to be making his first trip down the aisle now that he’s finally proposed to his girlfriend of six years, Siri Pinter. 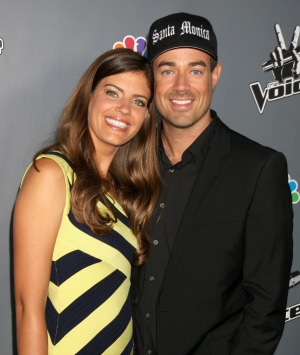 After six years and two children together, Carson Daly decided to put a ring on girlfriend Siri Pinter’s finger. Us Weekly broke the news on Sunday after the mother of two was spotted with a beautiful diamond ring on her hand on Saturday.

The 40-year-old host has a lot on his plate this fall. In addition to his hosting duties for The Voice, he joined The Today Show in September for its new Orange Room, which features trending topics and social media buzz.

The couple are proud parents to son Jack, 3, and daughter Etta Jones, 13 months.

Pinter is a food blogger who shares recipes and giveaways on her site, Siriously Delicious. The couple are splitting their time between their New York and Los Angeles homes because of Daly’s bicoastal gigs.

Kimberly Perry of The Band Perry is engaged! >>

The NBC star is over the moon with all of his recent personal and professional success.

He said, “I grew up watching all of these guys [on The Today Show]. Being a guest on the show was fun and then filling in was surreal. [This is] the real pinch-me stuff.”

The couple haven’t confirmed the news via their reps or their social media accounts, but the entertainment site has a photo of Pinter’s gorgeous diamond ring. Perhaps Daly wants to make a big announcement on Monday’s episode of The Today Show?

Either way, it sure looks like a wedding is on the horizon.