Stephen Colbert is an ordained minister, and he decided to help a couple who were forced to delay their wedding due to the government shutdown. 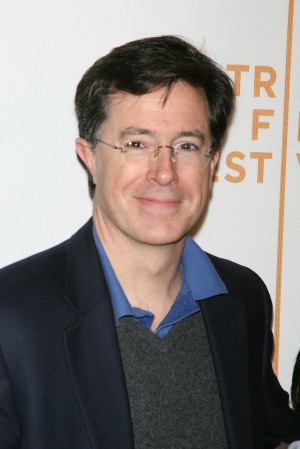 Stephen Colbert has always found fun and unique ways to illuminate political drama, and his comedy during the government shutdown has been no different.

The Colbert Report host, who is a family man himself, decided to highlight some of the victims of the current government shutdown: brides and grooms who have had to delay their weddings because they planned to be married at national parks or memorials.

Stephen Colbert rocks out to Daft Punk’s “Get Lucky” >>

Colbert, whose show recently beat Jon Stewart’s Daily Show for the Emmy, promised to “provide all canceled government services during the shutdown,” according to The Hollywood Reporter, and decided to marry a couple whose wedding was delayed. Mike Cassesso and MaiLien Le, who had planned to get married at the Jefferson Memorial, became a part of Colbert’s “2013 Government Shutdown Wedding of the Century,” which squeezed all necessary wedding rituals, including bachelor and bachelorette parties, into 15 minutes. (Colbert himself acted as the stripper for the bride.)

“I am actually an ordained minister of the American Marriage Ministries,” he said, adding that the group provides “the most prestigious ministry certification you can get online while also being on the toilet.”

The 15-minute wedding week for the couple included a moment of cold feet for the bride.

“Listen, if Mike is not right for you, we will blow out of here and go get tattoos — just say the word,” Colbert told Le.

But when the bride revealed she was only nervous about such a public wedding, Colbert lost it (but only comedically, of course), saying, “Don’t you ruin this for me. This is my special day, OK?! I have been dieting for like 15 minutes. You’re gonna be fine, you’re gonna be great. But it doesn’t matter because everyone’s going to be looking at me, OK?”

The couple finally went through with the wedding, including being serenaded by Billy Idol’s “White Wedding” for their first dance. But an even bigger star, and national icon, stood in as the best man: Smokey Bear.

Congrats to the happy couple! Watch the full video here: