Kathy Griffin is at it again. At a recent event, she pulled her hilarious shenanigans on her pal Gloria Estefan. 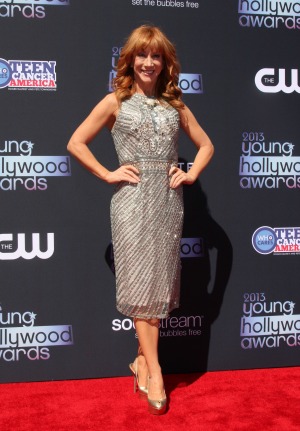 Kathy Griffin has been known to stage a stunt or two on TV. Just ask her pal Anderson Cooper about their New Year’s Eve broadcasts together. However, no one ever expected her to pull a fast one on Gloria Estefan.

Griffin appeared on The Tonight Show Wednesday night, where she recalled a recent September event with the Miami-based singer. Estefan was celebrating the launch of her most recent album, The Standards, and the comedian was on hand to help her friend out.

The 52-year-old funny lady told Jay Leno, “I was actually doing a one-nighter in Miami, and my good friend Gloria Estefan introduced me. I thought, I’d like to keep these celebrities on their game so… I just for no reason lifted my dress, and the look on her face I think says it all… [but] I don’t know what I was thinking wearing the granny panties.”

Griffin is pretty open with things like this, so naturally she tweeted out a photo of the moment with Estefan’s shocked face. The My Life on the D-List star stood there in baggy, white granny panties as she lifted her dress.

The “Conga” singer recalled the event in a recent interview on Extra.

She told host Renee Bargh, “My face says it all in that picture.”

The Latin superstar also agreed that the Bravo TV star’s underwear was “10 sizes too big.”

Estefan probably learned her lesson that Griffin is never on her best behavior, especially when a laugh is at stake.