Miley flipped out on Sinead O’Connor after being offered some advice about the industry she is in. Now, O’Connor is calling out Simon Cowell for “murdering” the music industry. 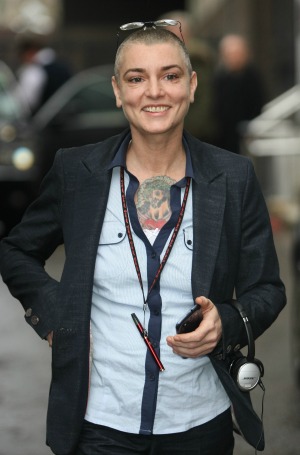 Sinead O’Connor has been busy all week with a full schedule of celeb bashing. Her newest victim appears to be none other than Simon Cowell.

O’Connor started a fight with Miley Cyrus earlier in the week, warning her about how the music industry could use her. Apparently, O’Connor is also worried about the overall state of music, and Cowell is a good target.

The Irish singer, appearing in an interview on The Late Late Show in Ireland Friday, said Cowell is causing the death of rock ‘n’ roll.

“I feel sorry for the murder of music and rock ‘n’ roll, which has happened because of the industry,” she said, according to People. “Because of Simon Cowell — [and his fellow judge, music exec] Louis Walsh — they’ve murdered music.”

It looks like O’Connor doesn’t blame Cyrus for her role in the industry but thinks the industry is “sexualizing… extremely young people.”

As she explained it, “There’s a certain alarm that needs to be rung, and I know there are a lot of musicians around the country and around the world that will agree. The power of rock ‘n’ roll to change things, to move people, is being murdered by all this worship of fame, Pop Idol, X Factor, all this stuff.”

The feud between the singer and Cyrus ironically came 21 years (almost to the day) after O’Connor made a controversial appearance on Saturday Night Live. In that Oct. 3, 1992, episode, she ripped up a photo of the pope while mouthing the word “evil” to make a statement about the sexual abuse of children within the Catholic Church. This happened a month and a half before Cyrus was born.

The 46-year-old singer said she was worried about Cyrus, as a mother, but the 20-year-old reacted badly on Twitter, comparing O’Connor’s past mental issues to those of Amanda Bynes.

“Pour It Up” video: Will Sinead O’Connor write Rihanna next? >>

The “Wrecking Ball” singer posted a photo of an unverified Sinead O’Connor Twitter feed along with the words “Before Amanda Bynes…. There was….”

“I was upset on behalf of Amanda Bynes, not for myself,” O’Connor said. “I thought it was a nasty thing to do. She had nothing to do with the conversation, and also the poor girl is in hospital receiving treatment for the very illness she’s being knocked for having.”

O’Connor continued, “It was a very nasty time to expose a girl, but I doubt Miley is a person who sat down and maliciously thought that ‘I want to hurt Amanda Bynes.’ We’re all human and we all do things off the cuff.”

Neither Simon Cowell nor Amanda Bynes has commented on being dragged into this feud.