Everyone is talking about Miley Cyrus these days. Now, Hulk Hogan is getting in on the act by spoofing her “Wrecking Ball” video in a new ad campaign. 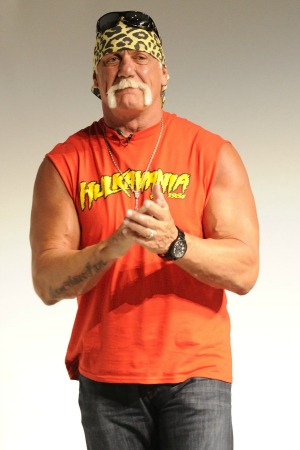 Here’s something none of us needed to see: Hulk Hogan in a thong. That’s exactly what we see in the wrestler’s new commercial for his web hosting company, Hostmania.com. The 60-year-old athlete shows off his bare bottom while spoofing Miley Cyrus‘ “Wrecking Ball” video.

It didn’t take long for the memes and parody videos to appear after Cyrus launched her video, but no one expected Hogan to join the fray.

The video doesn’t make a whole lot of sense, but it sure leads to a lot of watercooler discussion. The ad starts out with the pro wrestler dressed in typical office wear, coloring a photo of himself.

Once he swivels his chair, a man chewing a red crayon appears before him upside down. That’s when Hogan takes action and jumps on his wrecking ball to knock out the man. He’s dressed in full wrestling gear with his feather boa, bandana, tie-dyed yellow and red spandex and yellow boots.

After the man falls to the ground, the wrestler spins on the wrecking ball to reveal his thong and shredded shirt. He smacks his bottom in victory as rock music plays over the scene.

As bizarre as the video sounds, it just proves that Cyrus’ video is a pop culture phenomenon. Whether you agree with her message or not, the video certainly is pushing buttons in many directions. It broke a VEVO record, with over 100 million views in six days.

The 20-year-old told the Daily Mail, “I think the video is much more. If people get past the point I make, and you actually look at me, you can tell I look more broken than even the song sounds.”

We’re not sure that’s the point Hogan is trying to make, but he sure makes an interesting statement.