The cast of The Hunger Games is back on set, but the veterans were worried all the new actors wouldn’t understand their close friendships. 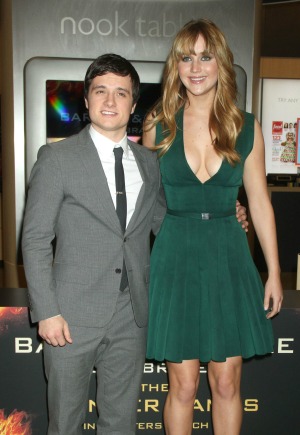 Competing with Liam Hemsworth for your on-screen girlfriend can often leave a guy feeling a little left out. Josh Hutcherson, who plays Peeta Mellark in The Hunger Games, talked to Glamour about being back on set.

The Hunger Games: Catching Fire will be out in November, and the first half of The Hunger Games: Mockingjay will be out a year later. After a bunch of new characters were added for the third film, the veteran actors were worried about what it would feel like when they returned.

“Jennifer [Lawrence] and I were nervous about our new co-stars because we’re kind of crazy when we’re together, so it can be a little scary for the new people,” Hutcherson said. “But everybody jumped right in. It was a fun vibe on set.”

The actor was asked how weird it is when you are great friends with a woman but all of a sudden have to be romantic with her on screen. For Hutcherson and Lawrence, it sounds like their great friendship made the on-screen chemistry more difficult to handle.

“There are times when we’ve had to cut because we can’t get through a take without laughing,” Hutcherson said.

Hutcherson plays one of the three main characters involved in a love triangle, and it’s easy to believe he could be a romantic in real life as well. When asked if it’s difficult to be “just friends” with women, he said, “Absolutely, but there’s often a natural inclination to want more.”

Liam Hemsworth is also back on the Mockingjay set and has been cozying up with J-Law.

Hutcherson, although a little biased, said he is definitely on the side of his character in that love triangle.

“I’m definitely Team Peeta!” he said. “But Katniss’ dilemma is very real — it’s hard to know who to choose when you admire two people who are so different. The love triangle gets played up a lot more in Catching Fire.”

Hutcherson isn’t the only one who has chosen a side in the triangle.

The November issue of Glamour will be out on Oct. 8. The Hunger Games: Catching Fire will be in theaters Nov. 22.