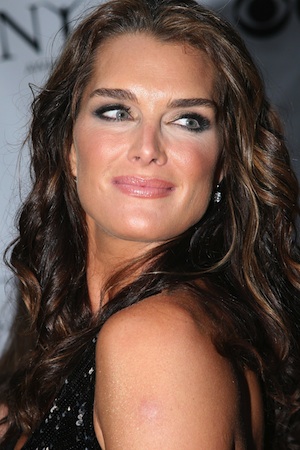 Brooke Shields was unusually candid about her divorce from professional tennis player Andre Agassi during an interview with high-profile divorce attorney Laura Wasser.

Shields was a guest co-host for the Today Show earlier this week along with regular host Willie Geist, and the two sat down with celebrity divorce attorney Laura Wasser as she promoted her new book, It Doesn’t Have to Be That Way: How to Divorce Without Destroying Your Family or Bankrupting Yourself.

Brooke recounted a painful conversation she had with then-husband Andre Agassi during their own divorce proceedings, and urged other couples to be aware of the intense, unique dynamics of divorce when children are involved.

“I am divorced,” said Shields to Geist and Wasser. “And mine was fairly quick, and relatively easy, but it’s a very interesting thing because he did say to me, ‘Be happy that we don’t have children or I would not have made this easy for you.’ And therein lies why I am not there anymore.”

Brooke Shields married Andre Agassi in 1997 during one of the most challenging times of his professional career. Shields’ comments on the Today Show starkly contrast the way she viewed Agassi over the course of their several-year relationship.

Melissa Errico, the wife of legendary professional tennis player Patrick McEnroe, said Shields was totally captivated by Andre Agassi. During an interview with People magazine published the day after Agassi filed for divorce, Errico said she often sat next to Shields during tennis matches and explained that Shields saw Andre more as the future father of her children than an iconic American tennis player.

“I remember her saying what an amazing father Andre was going to be — that more than anything he was going to be unbelievable with children. Instead of seeing the hero tennis star that the whole world is cheering, [Shields] was saying, ‘He’s going to be a great father.'”

Andre Agassi abruptly filed for divorce from Brooke Shields on April 9, 1999 — less than two weeks shy of the couple’s second wedding anniversary. Later, when Agassi released his autobiography, Open, he wrote that on his wedding day he knew that his marriage to Shields would fail.

“I have a thought no man should have on his wedding day: I wish I were leaving too. I wish I had a decoy groom to take my place.”

Both Shields and Agassi have since remarried other people and both have children with their new spouses. Shields said during her Today Show interview with Wasser, “The idea that once children come in there’s a whole other level to [divorce]. The arguing — these are the people that become most affected when we start making [divorce] about ourselves instead of the children.”

Wasser agreed wholeheartedly with Shields. “Absolutely,” said Laura. “That’s why you really need to remember that you are a family. And even if you’re not living under the same roof anymore, you are still a family and your children still depend upon you and their other parent to put them first.”

Watch the full interview on coping with divorce with Brooke Shields and Laura Wasser below: