On this week’s episode of Glee, Santana and her new flame Dani (Demi Lovato) sealed the deal with a kiss. 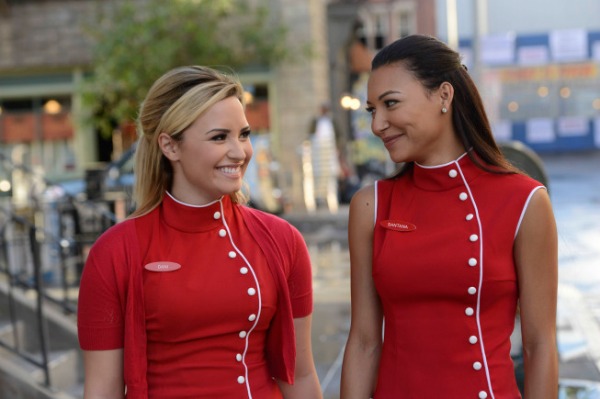 Glee is all about the equal love and in this week’s episode, the second part of their Beatles extravaganza “Tina In the Sky With Diamonds,” a couple of ladies got to share in that love.

After much anticipation, fans finally got to see the moment they’ve been waiting for since the news broke that Demi Lovato would be making a guest appearance on the show. Lovato’s character Dani and Santana (Naya Rivera) amped up their flirtation and sealed their budding relationship with a kiss.

Does that mean that the two are now a couple? The signs are good that things will go well for them, at least for a while. In a previous report on the Dani and Santana hookup, it was revealed that Lovato would be on the show for five episodes. So that could mean that their relationship will last for at least another few episodes.

By all accounts, Rivera is extremely happy to be working with Lovato.

“I mean, she’s playing my love interest, so I’m very, very excited about that,” Rivera told MTV on the red carpet for last month’s VMAs. “We get to sing a song together. It’s gonna be good. I’m excited to work with her.”

No word yet on whether Lovato’s story arc could go beyond the previously reported five episodes, but if both are enjoying the story, maybe the writers will keep Dani around for a while longer. Could this be a long-term relationship for Santana? Only time will tell.

Demi Lovato opens up about the death of her father >>

Next week, Glee steps back from the fun of its first two episodes of this season and will finally pay tribute to the late Cory Monteith (who died from a heroin and alcohol combination in July). The episode, “The Quarterback,” will say goodbye to his character Finn, while allowing fans (as well as those behind the scenes) mourn the actor’s loss from the real world. A full box of tissues will be required, of that there will be no doubt.

What did you think of Demi Lovato’s appearance as Santana’s girlfriend on Glee?