Kim Kardashian is slowly introducing us to her 3-month-old daughter, North West. The reality star just posted a second photo of her newborn to Instagram. 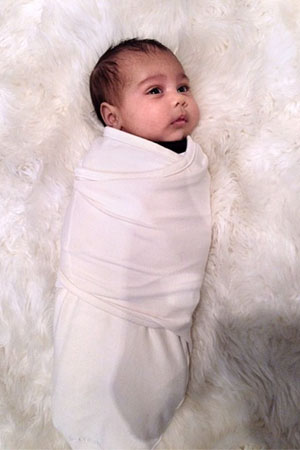 It looks like mom really missed her little one!

Kim Kardashian just arrived back in the United States from her whirlwind trip to Paris with boyfriend Kanye West — and she shared a bit of her happy reunion with friends on Instagram.

“I missed waking up with my little angel,” she captioned on the shot that showed the 3-month-old swaddled and lying on a white fur blanket.

Kim Kardashian is keen to ditch her family >>

It’s the second photo the couple has shared of their little bundle of joy. The first was debuted in August by daddy West on Kris Jenner’s short-lived talk show. The first photo really showed baby Nori’s resemblance to Kardashian (especially in the eyes), but we see more of West in the second photo.

Kardashian’s trip across the ocean was her first since giving birth in June. It’s likely Nori will forgive her for this little vacation, especially since mom came home bearing tons of gifts from designer friends like Givenchy, Lanvin and Celine.

Don’t expect Kardashian to start posting daily photos of her little “angel,” though: Sources say the new mom and dad have banned family from sharing pictures on social media.

“Kim does not think for one minute that her mom or sisters would try to sell pictures of North,” a source told gossip blogger Rob Shuter.

“Her concern was that everyone in the family loves to post pictures of what they are doing all the time on Twitter, and that this is something that she does not want to happen while she is away.”

All we know? Baby Nori is one adorable little girl!