Julianne Moore’s career has reached a new level, as the iconic actress can add another accolade to her long list — the 2,507th star to the Hollywood Walk of Fame. 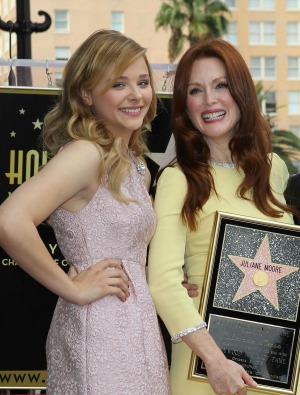 Julianne Moore has been honored for her outstanding achievements during her acting career and has finally received the 2,507th star on the Hollywood Walk of Fame!

The unveiling ceremony took place on Thursday, and according to E! Online, the Crazy, Stupid, Love. actress was joined by her family — husband Bart Freundlich and her son Cal and daughter Liv.

It is not surprising that the actress has received this accolade because Moore has already enjoyed immense success in her career, including an Emmy win for her performance in Game Change, in which she starred as Sarah Palin.

She also has been nominated for four Oscars — two Best Supporting Actress nominations for her spectacular roles in The Hours and Boogie Nights and two nominations for Best Actress, for her outstanding performances in Far from Heaven and in The End of the Affair.

Moore was thrilled with the honor and commented before the unveiling, “I never expected this, I am thrilled and shocked to be included in this community.”

Anna Martinez, producer of the Walk of Fame ceremonies said, “Julianne Moore has captured our hearts on the big screen with her amazing work. She is one of the most gifted and charismatic actresses of our time and we are honored to have her immortalized on the Walk of Fame.”

The four-time Oscar nominated star looked stunning in a bright yellow Dolce & Gabbana dress and classic white high-heel sandals as she roped in her family in for a picture in front of her special plaque, as well as posing with Moretz, and giving the young actress — who thinks of Moore as her mentor — a kiss on the cheek.

Congratulations to the beautiful and talented Moore on her award!