A new twist on an old tale just wasn’t as exciting as we’d hoped. Though the pilot was reshot from Elijah’s perspective, it was still the same information we already saw. Bring on Episode 2! 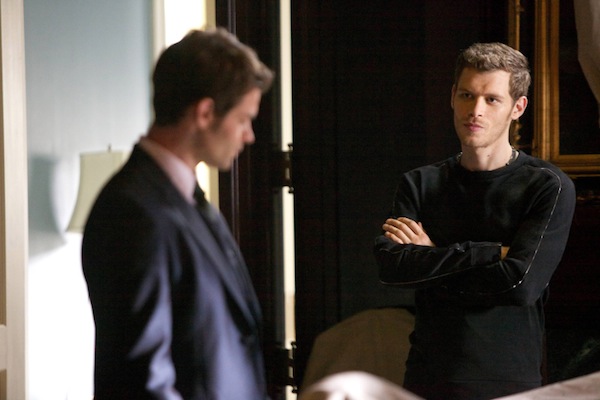 OK, so the premiere of The Originals was a bit boring.

Why? Because we already knew the twists and turns the episode takes (except for the very end!). But the show had to find a way to catch up a new audience so we understand. It doesn’t mean we aren’t still excited to see what’s next.

If you’ll remember, the pilot episode of The Originals already aired last season on The Vampire Diaries. It was enough to whet our appetites and make us want more. But then there was a problem: Should the show just air a repeat of the pilot for the season premiere of The Originals?

The way the show tried to solve this problem was by airing the pilot again but from Elijah’s perspective. It didn’t really succeed. We already wanted more. Showing us the same thing twice didn’t make us want even more. It’s like someone giving you a Christmas gift, rewrapping it and then giving it to you again as though it’s new.

Luckily, we only have to wait until Oct. 8 for the next episode.

That being said, we did discover a few interesting things about Elijah:

He and Hayley have chemistry

As Elijah was sharing the story of the original family with Hayley (Phoebe Tonkin), he was looking deeply into her eyes while she gazed on in wonder. There’s a definite connection. We think mouthy Hayley might be a fun match for composed, straight-laced Elijah. The two could be really interesting together.

He also asks Hayley about her feelings on motherhood. Elijah takes a genuine interest in her and promises to always protect her.

He really wants the baby

Family is first for Elijah. He’s not really concerned about Marcel so much as interested in protecting his own interests. The witches agree not to tell Marcel about the baby as long as Elijah helps the witches get rid of the vampire’s control. He’s willing to be blackmailed if it means protecting Hayley.

The Originals: First look at Episode 2 >>

Though he won’t hesitate to snap necks if necessary, it isn’t his go-to unlike Klaus (Joseph Morgan). Elijah is calculating. The Stefan to Klaus’ Damon, if you will. We hope Elijah will be the voice of reason throughout much of the season as Klaus struggles for power in New Orleans.

He and his father tried to kill Klaus

Thousands of years ago, when the original family discovered what Klaus was, he was dubbed an abomination. His father decided he had to go. So they did what any normal, loving family would do. They strapped Klaus to a wooden stake and tried to burn him to death. No wonder Klaus has so many issues. Elijah has a lot of guilt over the murder attempt.

Just as the show is about to end, we get a couple of new surprises. First, we discover Marcel’s secret weapon. He’s got a little witch named Davina who is powerful enough to allow Marcel to control the other witches and detect when they use magic.

Then, in the last moments of the show, Klaus crushes Elijah’s heart. So much for a Hayley/Elijah romance. At least, for now. Klaus thinks mercy makes Elijah weak, and Klaus wants to win the war against Marcel by himself. Boo! Did Klaus kill Elijah for good? We highly doubt it. Hopefully Rebekah will swoop in next episode and fix the whole no-Elijah problem. We like him!

Other things to note: