The Vampire Diaries premiered strong, proving that maybe losing half the cast to The Originals wasn’t really a bad thing, but just what the show needed. 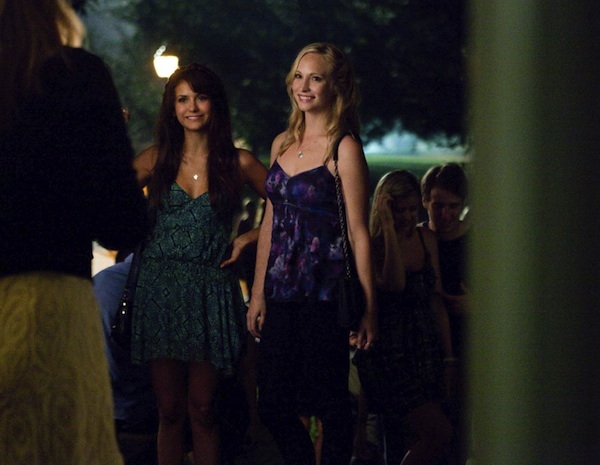 Though Caroline and Elena (Nina Dobrev) are off to college, The Vampire Diaries is getting back to its roots. Don’t get us wrong — we loved Klaus, Rebekah and Elijah — but the show was getting bogged down by that storyline last season.

With the series premiere of The Vampire Diaries tonight, it’s like we’re breathing (except for Stefan…) for the first time in a while and only just realized we were suffocating before. The show is taking us back to the beginning: with Stefan, Damon and Elena at the core. Season 5 has begun!

The Vampire Diaries is clever.

Everyone knows freshman year is all about finding yourself, trying new things. It can also mean horrible roommates, frat parties and not so much class time.

Elena and Caroline experience all of these things in the first episode. Only better. Because they’re vampires. And it’s pretty funny.

The best moment of the episode was the two of them trying to go to a party, but unsuccessfully because it’s at a house, and they can’t manage to get formally invited in.

Not to mention their vervain-drinking roommate Megan. Not only is she into organic clothes and juicing, which is enough to freak Caroline out, but Megan may just be a hunter who knows the girls are vampires. Nothing like worrying your roomie is going to stake you at night to spur those fond college memories.

Between Jeremy and Damon (Ian Somerhalder), that is.

Elena’s off to college, which means Damon has to take care of little Gilbert. Suddenly, Damon’s all domestic. We weren’t sure how we’d feel about Domestic Damon. Now we kinda dig it. Why? Because he’s so bad at being domestic. It’s fun to watch, admittedly.

The premiere sets up the characters on a race to find Stefan (Paul Wesley). Silas won’t tell anyone where he’s holding Stefan until he has Katherine in custody. Not to mention, Silas compels the whole town of Mystic Falls on a Katherine-hunting expedition after killing Bonnie’s father. We’re guessing it won’t be the last death this season.

At the party Elena and Caroline can’t get into, Megan falls from a window and dies. She has a cut across her neck. Elena says it’s from a vampire.

Then the school covers up the murder as a suicide.

Luckily, Caroline and Elena secretly take Megan’s phone from her body. They plan on investigating the death and the school cover-up.

But they find something unexpected when looking at Megan’s photos. There’s a picture of Elena’s dad. With Megan.

Uh, could Megan be Elena’s half-sister?

This season’s gonna be so good!

Megan, the third roomie, who dies during the premiere. Don’t think she won’t play a role in this season just because she’s dead. What is her connection to Elena’s dad, and why is the school covering up her death?