David Arquette says he has finally found the love of his life, three years after his divorce from Friends star Courteney Cox. 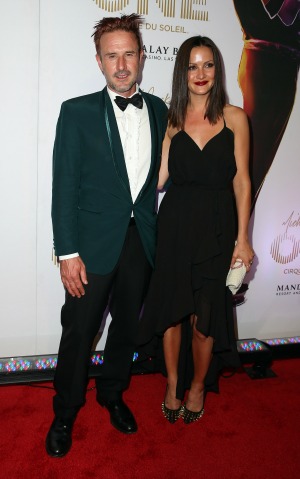 You may have thought David Arquette had found his soul mate in his former wife Courteney Cox, who he was married to for 11 years (a century in Hollywood terms).

However, that is not the case because the 42-year-old actor has recently admitted to finding the love of his life, three years after the end of his marriage.

So who is the lucky lady? His girlfriend is Entertainment Tonight reporter Christina McClarty and the pair are completely smitten.

Arquette appeared on Andy Cohen’s Watch What Happens Live on Tuesday night to share personal details and gush about his current happiness.

A caller named Nancy phoned in to the show to ask the actor about his love life, saying, “Are you dating anybody? I think you’re wonderful, original and I love you.”

To which Arquette replied, “Aww. Thank you, Nancy. I am, I’m dating an amazing girl named Christina McClarty. I’m madly in love with her and she’s the love of my life. Absolutely.”

While Nancy’s dreams may have been dashed in that instant, the confession also took the host Andy Cohen by surprise.

Cohen asked Arquette in an attempt to clarify, “Wow, she’s the love of your life?”

To which the Jake and the Never Land Pirates star gladly responded, “Absolutely, She’s my girl. She’s got my back.”

While Arquette found the love of his life two years ago, the pair endured a brief split in March 2012, when he apparently fell off the wagon. However, if the actor’s recent confession is anything to go by, we suspect there may be wedding bells in the near future for the happy couple.

It appears Arquette’s former wife may also be happier without him, too. According to Us Weekly, Courteney Cox has been dating her Cougar Town co-star Brian Van Holt since January 2013.

Cox and Arquette have managed to remain friends throughout their divorce, as the Scream actor told ABC News on Tuesday.

“It really was a goal of ours to not make it a fight, to really support each other and although we’d grown apart to stay connected, to stay friends, to still love each other,” Arquette said.

“I still obviously feel so blessed that I met her and that we have a child together and that she’s in my life. She’s still one of my closest, greatest friends.”