In the first episode of ABC’s new comedy Super Fun Night, Rebel Wilson gives a voice to women who won’t let fear of rejection keep them from getting ahead in life. 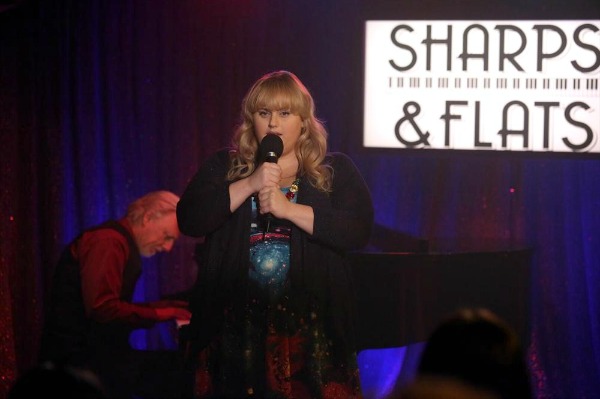 When I heard that Rebel Wilson (who made me laugh so hard I cried in Bridesmaids) was in a new comedy show, I was excited to see her on my TV screen every week. Then I kept hearing rumors that Super Fun Night wasn’t being given great reviews and that ABC had even decided to air the second episode instead of the pilot. Any time a network does that, it’s usually a bad sign. So it was with a fair amount of trepidation that I sat down to watch the premiere, called “Anything for Love.”

Wilson plays Kimmie, a woman who, on paper, might seem to be living a perfect life. She’s a lawyer who just got promoted at her firm, has an amazing group of supportive friends and recently just met a great guy. So, what’s the trouble? Well, it seems that Kimmie has a case of severe awkward-itis, as well as an almost uncanny talent for getting herself into ridiculously embarrassing situations. Just a few of the situations that poor Kimmie endured in this episode included losing her skirt in an elevator (right before the man of her dreams walked up) and accidentally knocking a light out of the ceiling at work (still not sure exactly how that one happened) and many others. She also finds herself with a brand-new enemy in the form of a new lawyer at the firm named Kendall (who is tall and skinny, natch) hell-bent on taking away Kimmie’s new guy.

Come for the chuckles, stay for the triumphs

What I loved about the show was that, in the face of all the adversity, Kimmie doesn’t let any of it get her down. In the beginning of the episode, we see Kimmie doing an entry in her video diary and not once does she mention how things may not be going her way or how she might have a few pounds to lose, or any of the other self-deprecating things one might expect someone like her to say. That might have to do with her incredible support system — her friends and her new guy. Helen-Alice (Liza Lapira), Marika (Lauren Ash) and Kimmie have all been best friends since high school and though Richard (the guy) is new to the mix, he seems to care for her just as much. When the evil/skinny woman Kendall (Kate Jenkinson) tries to make moves on Richard (Kevin Bishop), he summarily ignores her.

Rebel Wilson discusses what is Super Fun and what is not >>

Big girls can be awkward and cool

The title of the show refers to a tradition that Kimmie and her friends have just begun, called “super fun night.” The idea is that they will pull an idea out of a jar and whatever they pick, they have to do. This week the challenge is to sing at a piano bar, no small feat for Kimmie since she once passed out cold at a talent show when she was a kid. Mean Girl wannabe Kendall gets wind of the contest and of course shows up with her amazing singing voice and tight dress in the hopes of winning over Richard’s heart. Kimmie has a few rough moments but in the end gets up there on stage and rocks out an awesome version of “Anything for Love.” Even when Kendall literally steals the spotlight from her, Kimmie doesn’t stop but keeps on singing and wins over everyone’s hearts. She may lose the trophy but goes home with her friends, her dignity and Richard — which is more than Kendall can say. The ending made me want to cheer because it proved that even big, awkward girls can be cool, too.

If you’re not sure about Super Fun Night, I say give it a shot before making any assumptions. You might be surprised at how it makes you feel. Also, the final scene during the credits — in which Kimmie struggles to get on a pair of Spanx — makes the first episode well worth the watch, just for that part alone.

“This is a really good smoothie.”

“I fainted. And then wet myself.”

“You just got lawyered.”

“We’re never going to bust out of our cocoons if we don’t put our busts out there.”

“Is sharing stationery a benefit?”

“My friends say I have a voice like a one-legged angel.”

“If I were a pony, what color mane do you think I would have?”

“I came here to motivate you, by showing you how awesome I am.”

“That drunk little Asian is right.”

What did you think of the first episode of Super Fun Night? Do you plan to keep watching?