Famed espionage author of the Jack Ryan novels such as The Hunt for Red October and Patriot Games has died in Baltimore at the age of 66. 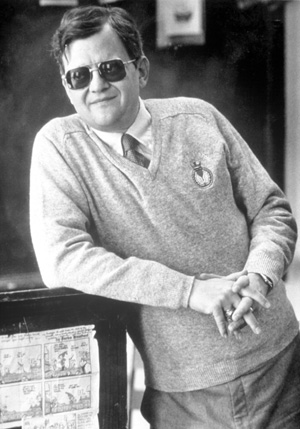 Tom Clancy — creator of the Jack Ryan character that starred in many of his bestselling novels including The Sum of all Fears, Clear and Present Danger and Patriot Games — died on Tuesday at a Baltimore hospital at 66 years of age.

Details surrounding Clancy’s cause of death are unclear at this time, but multiple sources have confirmed to Publishers Weekly and the New York Times that he has passed away.

The Baltimore native, who was once an insurance salesman, rose to fame with his smash espionage novels, many of which featured his beloved character Jack Ryan. His best sellers The Hunt for Red October, Patriot Games, Clear and Present Danger and The Sum of all Fears were all made into major blockbuster films.

Clancy’s Jack Ryan went on to be portrayed by stars such as Harrison Ford, Alec Baldwin and Ben Affleck. Star Trek‘s Chris Pine is set to star in the latest Jack Ryan adaptation with Jack Ryan: Shadow One.

Another character created by Clancy that also featured in many of his novels is John Clark, a CIA paramilitary case officer. Clark was portrayed by big-time actors such as Liev Schreiber and Willem Dafoe.

Not only did Clancy’s novels become movies, but he also served as producer in several adaptations. He co-founded Red Storm Entertainment, which features video games based on his work, including the popular Splinter Cell series.

Splinter Cell is going to be made into a film as well, which will star Tom Hardy as Sam Fisher.

In 2002 Forbes magazine went on to praise Clancy for his successful books, saying that “Clancy can produce a guaranteed bestseller by just writing two words: his name.”

Noting that Clancy’s income at the time put him as the tenth-best earner in the Forbes Celebrity 100 list for that year, Forbes added, “When it comes to leveraging his brand across multiple channels, he is positively protean.”