Kimberly Perry had her perfect idea of a proposal, and her new fiance made sure he followed it to a T. 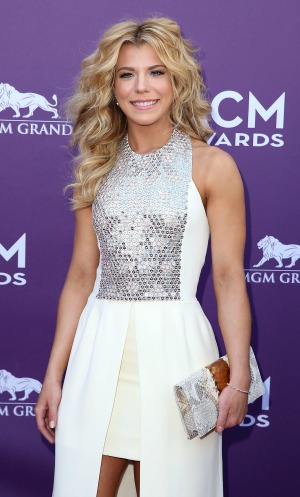 Kimberly Perry of The Band Perry is officially off the market. Boyfriend J.P. Arencibia, catcher for the Toronto Blue Jays, proposed to the singer Monday night!

Perry told the LA Times she was getting ready to pick Arencibia up at the airport when she walked outside, and saw her family waiting.

“If I get proposed to in this life, I hope it happens underneath this tree,” she previously said about an oak on her parents’ 15-acre property in Greenville, Tennessee.

Arencibia took note, and waited for the 27-year-old under the tree.

“I saw that and I thought, ‘This is really happening,'” she remembered.

Perry didn’t quite live in the moment. She returned to the house and put on a pink dress and bracelet she has been saving for the day of her engagement.

“I got… dressed and put on my grandfather’s bracelet,” Perry said. “I came back out on the front porch and he was standing there and he got down on one knee. It was perfect.”

Perry and Arencibia met at a strawberry festival in February 2012, but he knew she was his soulmate even before that. The 30-year-old previously said that, when he saw the music video for “If I Die Young,” he “had this moment where he felt like that was going to be a part of his future.”

?”I’ve never felt that with anyone before,” she said. “He’s just a really gentle soul. He balances me for sure.”

Perry made sure to get the approval of the rest of her band, Neil and Reid Perry. The couple told The Tennessean they expect to get married next summer.

Congrats to the couple!