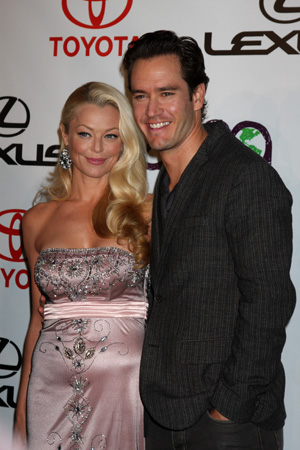 Mark-Paul Gosselaar is a daddy for the third time after he welcomed his first child with wife Catriona McGinn on Monday, Sept. 30.

The former Saved by the Bell actor and his wife, an advertising executive, are the proud parents of son Dekker Edward, who joins Gosselaar’s two older children from his previous marriage to Lisa Ann Russell.

“We are overjoyed with the new addition to our family. We are madly in love with our little boy,” Gosselaar told Us Weekly. “He is healthy and just perfect — all we could ask for.”

Mark-Paul Gosselaar in a hurry to marry Catriona McGinn >>

About two weeks before little Dekker Edward was born, Gosselaar spoke to People magazine and while he didn’t reveal the baby’s gender, he did talk about his name. “It is not traditional and it is not too quirky. It is different, but it’s not something odd,” the Franklin & Bash star said.

Gosselaar and McGinn first announced the pregnancy about eight months after they married in July 2012, telling Us that the family was “really excited for the arrival of our new addition. We’ve always wanted a big family.”

Gosselaar’s kids — Michael, 10, and Ava, 7 — are “looking forward to a little sibling, and are asking a lot of funny questions right now.”

The two children have also embraced their dad’s new wife, who he was engaged to for a year before getting hitched. “My kids absolutely adore her.” He also said that “she’s stunning. And she takes my breath away!”

Gosselaar is the second Saved by the Bell cast member to welcome a child in the last few weeks. Mario Lopez also added a new addition to his family when his wife gave birth to a boy named Dominic on Sept. 10.

Prior to tying the knot with McGinn, Gosselaar was married to Russell for 14 years before divorcing in May 2011.