Taylor Swift is perfect in her imperfections says “Royals” singer Lorde, who is now trying to avoid a feud with the fan favorite. 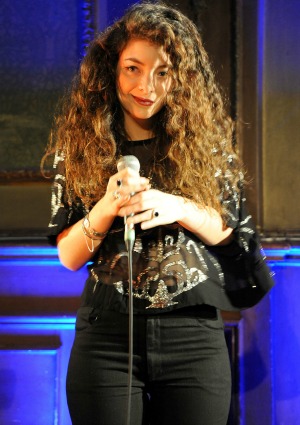 Up-and-coming pop sensation Lorde just learned a harsh lesson: Everything you say to the media can and will be used against you, especially if it’s about your competition.

The “Royals” singer said being like Taylor Swift is an “unattainable” goal for young girls and she just wants to be the best herself she can be.

“Taylor Swift is so flawless, and so unattainable, and I don’t think it’s breeding anything good in young girls,” Lorde said in an interview with Metro Magazine.

Swift fans totally freaked out when they read it, and now Lorde is explaining her comments and apologizing before it blows up even more.

“I think I cocked that up a bit and what I said wasn’t put in context also,” she responded to a fan’s question about her comments on her Tumblr. “What I meant was: there’s a lot of importance placed on physical perfection in this industry, and I wish my favourite stars didn’t look perfect because I think fans (me included) have these feelings of worthlessness, like they’ll never be as pretty/talented/whatever, as a result of this intense photoshop culture and the endless strive for perfection.”

“TS was the first person I thought of, which I regret. She happens to be good looking, but I think she actually uses her other imperfections in an incredibly powerful and relatable way. Taylor Swift has a very unique vision, which i admire.”

“I think somewhere along the line also there was a misquote where people got the impression I thought writing about love was shameful,” Lorde continued. “I don’t! I just haven’t found a way of doing it which is powerful and innovative, which is why I don’t.”

“I am very very new to this whole thing. I will probably never be the kind of role model for my fans that TS is for hers. I admire her very much for this reason. Basically, this is an apology for not thinking too hard before I speak. Peace.”

The uproar comes just days after Miley Cyrus fans threatened her life for daring to beat out the “Wrecking Ball” singer for the top spot on the iTunes downloads chart.